There is an entire series relying on the same Toonz characters as this one. Gigantoonz is just one of many cute alien creatures which populate the reels of this slot machine, though most of the others are smaller and more appealing than it is. Still, with one or two eyes, smaller or larger, you get a variety of these characters on the reels, and they’re the only ones occupying the game area.

You will discover 5 lower paying symbols, creatures with one eye, while the 5 top paying ones have 2 eyes each.

Gigantoonz is a slot machine from Play n GO, and it’s part of a series that also includes titles like Reactoonz (1 and 2) and Dr. Toonz. These are all cool to explore, if you enjoy Gigantoonz, but their collection is massive, so definitely don’t stop at those few slots. 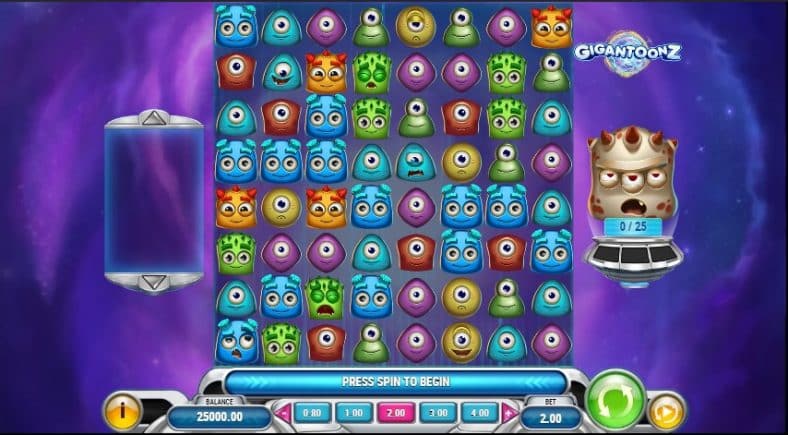 At the bottom, you will discover a number of bet options, standard ones for a developer like Play n GO. The smallest wager can be valued at $0.20, while the highest one requires $100 for each spin.

In exchange, you will get 8×8 reels, so 64 symbols are going to be arranged in that area. It’s a Cluster Pays system, where you need a group of 6+ matching symbols to be adjacent, in order to claim a prize from them.

There is a dropping mechanic inside, so this will take away the winning symbols which were part of clusters. The remaining symbols drop down to occupy empty positions, and then new alien creatures come from above to do the same with the spaces which remain available.

One of the interesting mechanics used in Gigantoonz, is going to take the form of mega symbols. These occupy anywhere between 2×2 and 7×7 positions. You will find that a value comes with each mega symbol, going up to x13, and this tells you how much it will contribute to a winning cluster’s prizes. It only counts as one symbol in a cluster when it is being formed though.

Quantum Wilds may appear during non-winning spins, and 5 to 10 of these substitutes will be placed in random spots on the reels.

A Quantumeter will also be used, to collect the winning symbols which are removed through the drops. You can charge it multiple times, and the levels are at 25, 50, 75, and 100. Each level brings a different feature.

Highly volatile, Gigantoonz is going to pay at most 4,000x the stake. You get a game with a Return to Player of up to 96.25%, but it can change if the casino wants to, so that’s something to check for.

Gigantoonz looks like a fine addition to this already popular series, and if you enjoyed the others, then I’d recommend you give this one a shot as well. Not much has changed when it comes to graphics, and the features will feel familiar, but it’s different enough that you would want to check it out anyway.