Golden Osiris deals with the Underworld, as that’s the kind of place that this deity rules over. Inspired by Ancient Egypt, it shows us a bigger game area than most slots will, using 7×7 reels in total, along with a series of themed and non-themed symbols. The former will include images of the Eye of Horus, Scarabs, the Ankh, Bastet, Anubis and Thoth. For the latter, we’re getting several types of colorful gemstones, coming in gold, green, blue and red versions. It’s not a great design, which is unfortunate if you care about that sort of thing and you place it alongside the many other slots telling the same sort of story.

As for the company which released it, this one’s coming via Play n GO, a developer with a lot of experience and with one of the largest collections of slot machines in the online market. These days, they are launching about one new slot machine per week, and it’s amazing that they can keep an above average level of quality in these games (the graphics of Golden Osiris are more of an exception, than the rule). 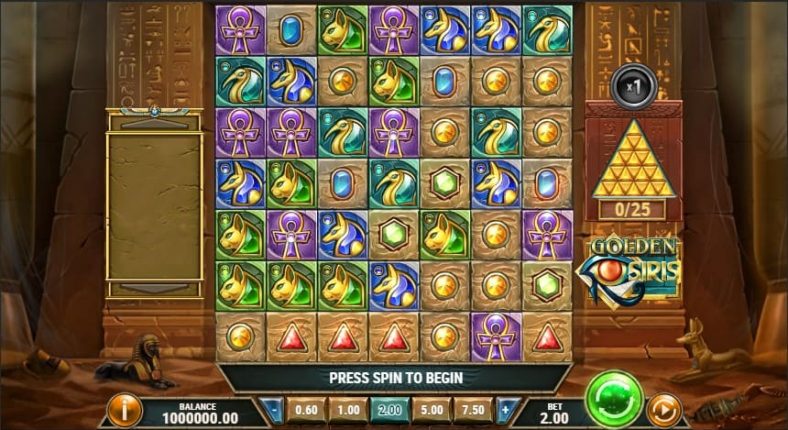 As with most of their slots, Play n GO allows for you to pick the total amount, even if it doesn’t have much to do with the actual setup. In this one, we’re seeing available bets in a range of $0.10 to $100.

Played with 7×7 reels and 49 symbols visible at all times, the game requires for clusters of 5+ symbols to form, in order to get you its prizes. For the best potential rewards, you need at least 25 matching symbols in a cluster.

Following the formation of its paying clusters, the game also has a Cascading mechanic. It’s going to work in the usual manner, removing the symbols which were in the combo, and getting you a new set in the empty locations. If this leads to additional paying clusters, then the cascades keep triggering.

You will sometimes find some treasures underneath those symbols which are removed. These come in the form of wild multipliers, which may boost wins by as much as 10x.

A special meter, shaped like a pyramid, is visible on the right side. There are 25 smaller pyramid-shaped pieces in it, and you fill them via winning symbols. Over the initial round, and the cascades which may follow, you fill the meter. Once it is fully charged, you will get a random symbol from it. It will be cloned from all its present locations, to one nearby position in each case. This doubles the number of symbols of that type on the reels, with a chance at more wins.

The pyramid can be recharged multiple times in a single spin, but it will reset once the round is over. Each additional recharge gives the multiplier a boost. You go to 3x for the second one, and it goes up by 3x for each one after that, until you get to 30x.

As for the free games, for those you need Eye of Horus icons in view, three of them in order to get 5 rounds. You start off each spin with a pyramid already charged, so you get closer to the bigger wins, and the expanding symbol is always a high value one.

As for the rewards that you’re hunting here, the upper limit for the game’s wins will be at 12,000x the stake. As volatile as the slot will be, there are also good things, such as the RTP which is at 96.27%.

Golden Osiris looks like it could be fun, but that’s all because of its special features and mechanics, not the actual graphics or story.