It might not look like it, but the inspiration for Hammerfall is coming from a Swedish metal band. Play n GO chose to implement it as a fantasy title though, while keeping the Nordic roots and using some of the region’s mythology in the design. It looks stunning if you’re checking out the background, but I can’t say the same about the symbol selection.

What you’re mostly looking at, is a game that has a mix of gemstones for its symbols, particularly the ones in lower paying positions. Besides the five gems, there are symbols with Moon or Sun shields, hammers, and a main character, the knight. Several feature symbols are also implemented, including here the H logos as wilds (red or blue).

The developer of Hammerfall is called Play n GO. They have an entire series of branded slots, based on metal bands from Sweden, and they’re all a lot of fun to play. 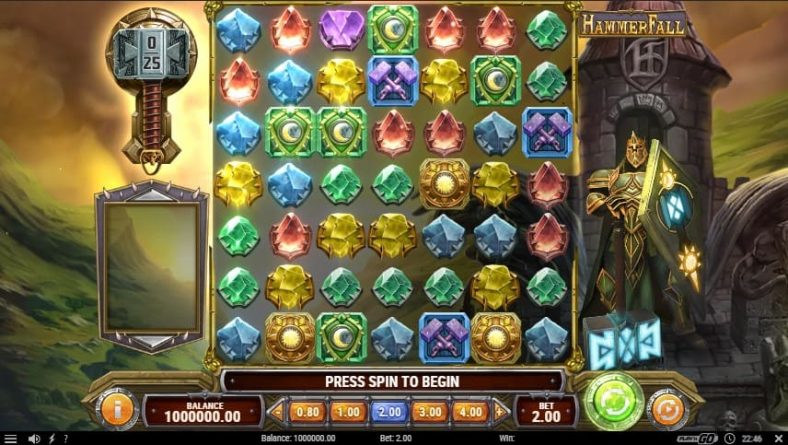 In exchange, you get 7×7 reels, and the Cluster Pays system, which will get you paid when you have 5 to 15+ matching symbols in a group (touching horizontally/vertically). Cascades trigger when you form clusters, allowing new ones to land and bring new wins.

If you can get a H logo next to a group of regular symbols, they will be able to form a cluster together, and get you paid. The wilds are the standard substitutes, that you may already be used to.

Regardless of how you’re forming your clusters, the winning symbols will be collected, and kept within the Hammer meter, on the left side. Charge it up, with 25 symbols that were in winning clusters that round, and you access a Song Feature that corresponds to the world you’re in. If you get 50 symbols, then the Hammer High feature triggers instead.

The Song features, are as follows:

If you get access to the Hammer High, then the three Song features are all offered in a single free spin, one after another.

A Super Tile is something that is added to random locations, and it’s marked with a special border. Get it as part of a winning cluster, and it will transform into a Lightning Wild. Up to 3x multipliers may be applied by these new Lightning Wilds.

Destruction is a random feature, coming during some losing spins, with several variants.

The potential payouts in Hammerfall are as impressive as the list of features and modifiers. 30,000x the stake is the ultimate target of any player that’s looking at it. High volatility will keep some of them away, but the 96.20% RTP is good enough to allow experienced players to check it out anyway.

Hammerfall looks pretty good, and while I would’ve preferred fewer gems on its reels, the excellent rewards and the long list of special features, should do enough to make it fun for most players, even if they don’t know anything about the metal band that inspired it.