Honey Rush is a bee themed slot machine, and a lot of its focus will be placed on their colonies and on hives in general. You see a bee hive which serves as the game’s reels, while as symbols the options range from honey jars, to diamonds, coins (gold, silver or copper) and flowers (four versions, including sunflowers and roses).

The design is very good, I have nothing to object there, and it helps that the slot’s layout is fun and unique as well. 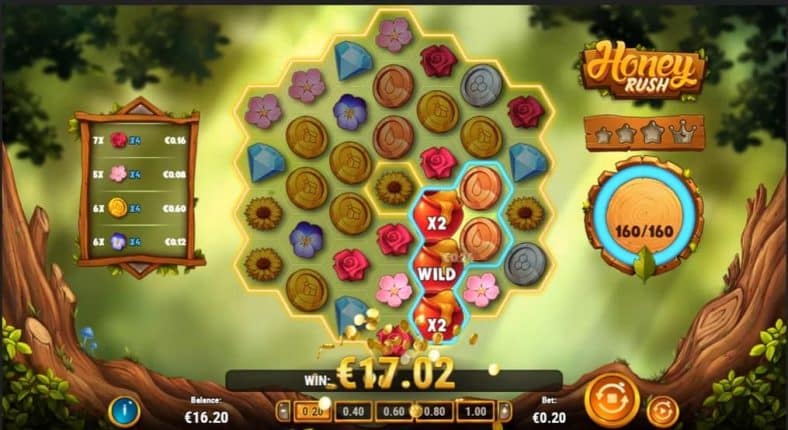 Play n GO has created almost 200 other casino games up to this point, and among them you will find that over 150 are slot machines. They certainly have the experience for it, and they’ve been launching games in this category for a long time now. Established in the late 90s initially, it has become an independent company since 2005, and they’ve been doing great in the online casino space. Some of their recent titles include the likes of Black Mamba and Golden Glyph.

As unusual as the game area might be, ultimately all you need to do is select a wager for each spin, nothing more. The options listed at the bottom range from $0.20 to $100, so there is something there for everyone.

It’s a game with a honeycomb-like structure, which needs to have clusters of symbols in place, so that it can get you paid. It’s not a new way of forming combinations, just a new presentation because of the connection to bees and their hives. Though not your typical slot machine, it shouldn’t pose you any real challenges.

To create your winning combinations, you just need 5+ matching symbols forming a cluster, where each one is connected to at least one other. Cascading reels are part of it, so the winning symbols are replaced, and that way there is a chance that a new wave of combinations will form.

A Rush Meter is located on the right side, and it’s going to have four levels, which you can advance through, as you charge it. You just need wins to form, in order for the meter to fill up. Collecting 20, 40 and then 80 symbols will allow you to advance through the first three levels. These levels will get you Drone Colonies, with the 4th level giving you a Queen Colony once you’ve collected 160 symbols. The colonies are clusters of symbols which will form on the reels, giving you wins of up to 37 symbols (Queen Colony). Random Worker Colonies can trigger at any time during losing spins, with clusters of 15 symbols being a possibility.

Finally, you also get the wild symbol as a feature, always welcomed, particularly here where it has up to 3x multipliers. Sticky wilds are used, but they can change positions from one round to the next.

The game’s going to have top paying clusters which will offer 200x total stake, and you need 35+ Diamonds on the reels for that to happen. The slot mentions that wins of up to 9,000x your bet are available inside, which is very good for a game of this type.

The slot’s considered highly volatile, a 10 out of 10, so it’s not the easiest game to make a profit on. On the other hand, it has very good potential prizes. RTP is typically set to 96.50%, but the casino may lower it to 94.50%, so make sure you check first.

Honey Rush will provide you with a bit of excitement, as a game with major potential, but also fairly high volatility. With cute graphics and new features, it should keep you busy for some time.