With three slot machines already out in this series, it’s obvious that players love it and that it’s one of the more popular characters from Play n GO’s collection. Hugo Carts is the latest release to include this cute troll character on its reels, along with the same supporting cast that we’ve seen in previous installments. It’s a very well designed game, with cartoon-style graphics, where the action revolves around a cute troll and a mining operation that takes us inside a crystal mine.

With mining carts going around the game area, we find on its reels a mix of Royals initially, each of them in a different color, between Ten and Ace. Besides the five low-paying symbols, we’ve also found four premium ones, which show us a shovel, pickaxe, oil lamp, and miner’s helmet. A bag of crystals is the wild, while the scatter shows us dynamite sticks. Three special symbols, using the images of Hugo, Hugolina, and Scylla, are also present at times, on specific reels.

The slot machine’s developer is Play n GO. They’ve created plenty of other games that look as good as this one, so if you enjoy your experience in Hugo Carts, definitely look into the rest of the slots of the series, or the hundreds of other options from their collection. 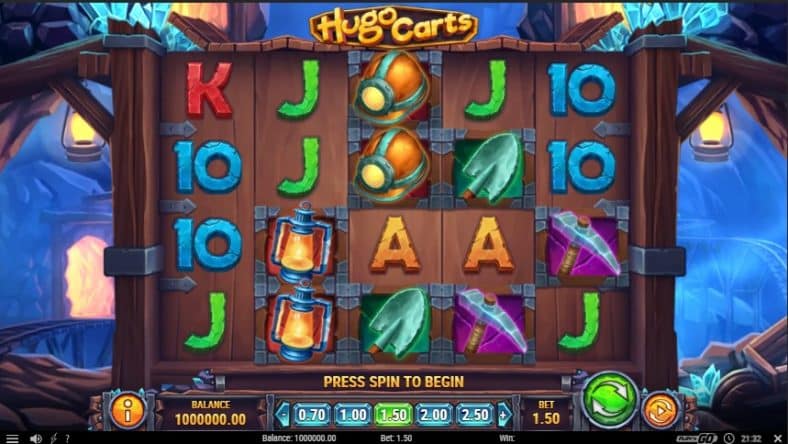 The game area that you’re given, will place 5×4 reels in front of you, using 1024 ways to win for its combinations. That would be the maximum number of wins you can have in a single spin. These combinations form left to right, on adjacent reels, so as long as you get your 3+ symbols, you get paid.

The Re-Spin mechanic is one of the major features that were implemented in Hugo Carts. These require one of the three characters landing on the reel that’s assigned to them (2nd reel is for Hugolina, 3rd is for Hugo, and 4th for Scylla). Each of these has its own modifier to trigger for that one re-spin that follows.

Should 3, 4, or 5 Dynamite scatters land, you will receive 7, 9, or 11 free spins, respectively. This can happen with help from a random Don Croco feature as well, which has this character coming in and adding 2 scatters on the reels.

One modifier is chosen at random, to be active for all spins. If retrigerred, the feature picks a second modifier to be active, and then a third as well. Once that’s done, you can’t retrigger it again.

Finally, I should mention the Wild symbol, with its bag of orange crystals. It’s a substitute for regular symbols, and it will also form its own wins (up to 10x the stake), but it’s of no use in triggering other features.

Hugo Carts has the potential to pay extremely well, with rewards as high as 25,000x the stake being a possibility in its case. Though highly volatile, it should also be mentioned that its RTP is as high as 96.23%. That being said, the RTP can also be lower, since Play n GO offers operators the option to choose their own level.

Overall, it’s another successful release from Play n GO. Hugo Carts is a slot that I’d recommend only to experienced players though, its high volatility will feel punishing to many beginners.