One of the bloodiest periods in Chinese history is represented in NetEnt’s product, called King of 3 Kingdoms. During the time of three kingdoms or states, Wei, Shu and Wu, plenty of people died, all because of the three Kings who wanted to take over the entire Chinese empire.

In the 2019 release, you will not have to join the battle, but you can win big, up to 1,840 times the bet per single spin. Set on a battlefield, King of 3 Kingdoms offers the Free Spins feature as the central attraction, with up to 25 freebies on the offer, while all wins during the feature are tripled. Join the battle and pledge your alliance to one of the kings and if your army is successful, you could walk away with piles of gold. 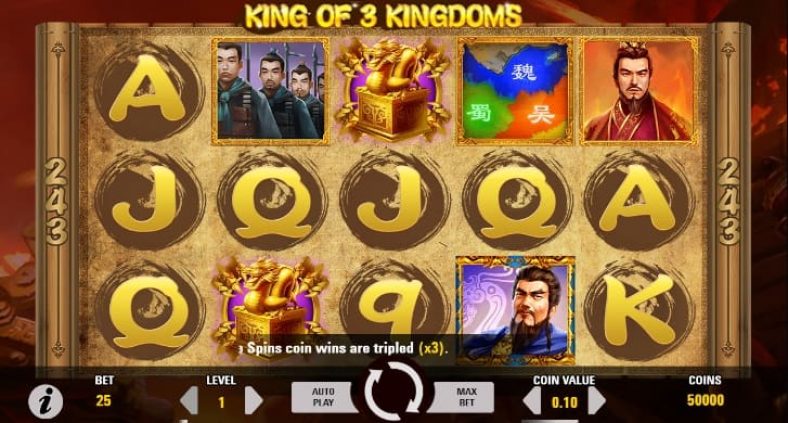 Founded back in 1996 in Stockholm, NetEnt is considered to be one of the oldest and most prominent giants of the iGaming industry.

More than 300 licensed portals are using the casino software developed by the Swedes. Even though Net Entertainment produces plenty of casino games, they are most recognizable by their video slots, which boast excellent graphics and offer the best playing experience gamers can wish for. Hundreds of games can be found in their catalogue.

The year is around 280 after Christ was born and the entire Chinese empire is devoured by wars of the three kingdoms – Wei, Shu, and Wu. All three kings have enormous armies and are ready to fight to the last man to fulfil their dreams of ruling the empire.

We are not that good in Chinese history, so we cannot tell you which King is which, but you can see for yourselves that there are three of them – Blue, Green, and Red. We suppose that the Blue King was the strongest since he pays the most. An Army will also appear on the reels, as well as playing cards that act as low-paying symbols.

The Wild is represented by a map of all three kingdoms, and it substitutes for all regular icons. The Golden Lion is the Scatter that triggers the Free Spins feature.

Spinners do not have to know military tactics in order to play the NetEnt title, because the rules of the game are quite simple. The 2019 release features five reels, three rows and benefits from 243 ways to win, with three of a kind being the minimum for landing wins. Of course, land matching icons from left to right, starting from the leftmost reel. Before you start spinning the reels, make sure you set the appropriate coin value and bet level and wager from $0.25 to $125 per single spin.

The central attraction of the King of 3 Kingdoms video slot is the Free Spins feature. Land three, four or five Scatters on successive reels, beginning from the leftmost reel, and you will trigger 15, 20 or 25 free spins.

During the feature, a 3x win multiplier will be applied on all wins. In the background, you will hear the sounds of battle, since the three kings are fighting for supremacy. The Map of the three kingdoms is the Wild that substitutes for all icons and it can only appear on reels 2 and 4, both during the base game and during freebies.

Even though the Chinese empire is enormous, the maximum payout is not that large, because the most you can win in a single spin is set at 1,840 times the bet. Set the wager to the max and you could win a respectable amount of money. The Blue King pays the most, offering 1,500 coins for five of a kind. Green is next in line, offering 1,000 coins for the maximum combo.

Like the three kings are trying to take over the entire Chinese empire, NetEnt is trying to conquer the Asian market with their King of 3 Kingdoms video slot, but we are not that sure they will be successful. The theme of the game is quite interesting, but such a story deserves more action, at least one more additional feature.

Since we are talking about the most turbulent period in Chinese history, more drama is needed in order to make the 2019 release fit the theme perfectly. In our humble opinion, NetEnt could have done better with the game, because we are far from impressed. Even so, some gamers could find it interesting.