Michael Knight and KITT are two famous names for the 80s TV industry, and Knight Rider is the name of the series where they both appeared. The slot machine, which comes from NetEnt, does a good job at bringing the 80s style look to life, without making it as dated as the era’s typical graphics.

The list of symbols starts with five Royals, the usual ones from the top, 10 to A. The next ones, of higher value, show us a digital watch, a steering wheel, a truck, KITT’s speakers, and Michael Knight (with the image of David Hasselhoff). The Knight Rider logo will be its scatter, and the Wild logo serves as a substitute.

From a developer like NetEnt, you can expect to get high quality in most respects. The developer has built its reputation on slot machines with great graphics, and while Knight Rider doesn’t fall in that category, it’s still a decent design to look at. They have a large enough collection, that finding other branded slots in it shouldn’t be an issue (examples would be Narcos, Jumanji, or Guns n Roses, to mention just a few). 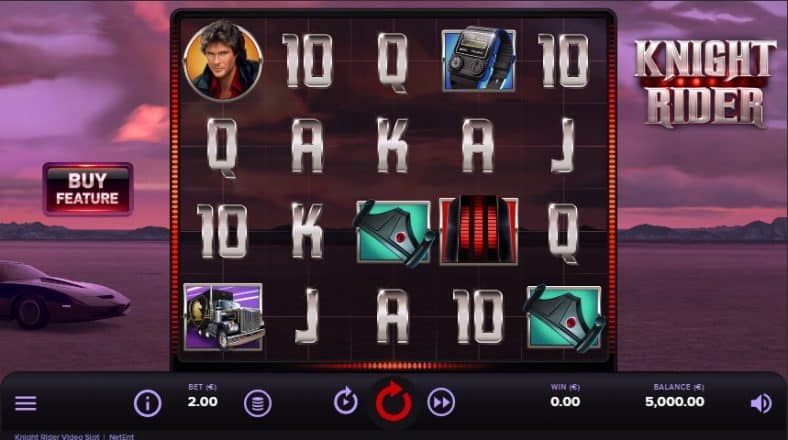 Knight Rider will require only $0.20 to trigger a spin, but you can increase the wager all the way up to $40 as well.

The setup of Knight Rider delivers 26 paylines, active on 5×4 reels. It’s not the typical number of lines that you’d find in this sort of game area, but there is no difference between it and other slots. You still need 3 to 5 matching symbols to form winning combinations on those lines.

Knight Rider’s wild symbol is not a regular one, and it actually gets exciting when it shows up on the reels. It’s a walking wild, which also has a multiplier to apply. You get it during all game modes, both paid and free, and on all reels.

If the wild is involved in a win, it remains on the reels, and it moves towards the right side by one position for the next spin. Depending on the reel it is on, the multiplier changes (1x to 5x, for reels 1-5).

It’s a game that has a randomly triggered feature as well, and it’s called Turbo Boost. It will give you 3-4 Walking Multiplier Wilds, placed in random locations.

Otherwise, the main feature of Knight Rider would likely be considered its free spins. With 10 rounds triggered, you need to land 3 Knight Rider logos scattered on the middle three reels first.

As each round begins, the slot adds up to 3 wilds to random positions. They retain the same abilities as in the base game, so they have multipliers and they walk towards the 1st reel when they are involved in wins.

You’re going to collect Knight symbols in this mode, and for every 3 you get to level up. This gives you 2 extra spins each time, in addition to an extra multiplier wild.

Knight Rider manages to provide the player with a decent enough top prize, of 7,000x the stake. In modern slots, which tend to be highly volatile, this sort of prize is considered average, with a lot of others paying two or three times more at their highest point.

You want to see a good RTP in a slot like this, and luckily Knight Rider delivers, since its returns are at 96.07%.

Knight Rider has a couple of advantages, compared with other modern slots, mostly coming from its branded theme and the various special features that are offered inside. It’s not going to be as motivating with its top prize as others are, but that’s something you can get past when the RTP is OK.