Designed by Play n GO, Legend of the Ice Dragon looks the part, with excellent graphics implemented both on and off the reels. They chose for it a fantasy-style dragon, shown hovering in the air next to the reels. The symbols you get on the reels are a lot less interesting, but they’re well made overall.

As for what those symbols show us, some of them will feature simple card suits, four symbols taking this form. There are also four elemental symbols, each one showing some sort of object or gemstone, colored in green, blue, purple, and red. The W wild will also be present on its reels.

200+ slot machines have already been designed and released by Play n GO, and if you follow their work, you can expect about 50 new titles to play each year. They’re at about one new slot machine per week right now, and they’ve been at it for quite some time.

Legend of the Ice Dragon 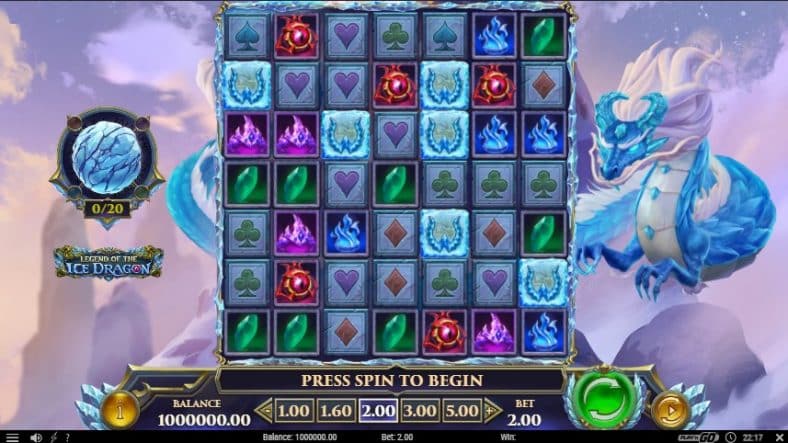 A complete range for your bets will go from $0.20 to $100. The entire list of bet options is shown at the bottom, you just have to select one of them.

This is a Cluster Pays slot machine, which uses 7×7 reels. To get paid, you will need a minimum of 5 matching symbols grouped up, which are connected horizontally or vertically. With 49 symbols shown, you get the best rewards when a cluster has at least 30 matching symbols in it.

Once you form a winning cluster, the cascading reels will remove its symbols. New symbols drop in, and could bring new clusters and further cascades.

A major symbol that I’ll mention is the Wild, available as a replacement, and able to help out with any cluster formed next to it. These wilds create Ice Frames in the positions they appear on. Get another wild to appear in an existing Ice Frame, as part of the Cascade mechanic, and there is a multiplier boost by 1x for it. The highest that it can go is 8x. If you get several wilds in a cluster, only the one with the highest multiplier boosts the prize. Unfortunately, to activate the Ice Frames, you first need to reach the Dragon Blast stage.

Random features that could come at any point, the Freezing modifiers include the Hailstorm (transforms random symbols into wilds), Avalanche (destroys two types of symbols and adds up to 7 wilds in their positions) and Blizzard (adds extra wilds by destroying symbols in a pattern).

As you create wins, you add their symbols to the Ice Crystal Charger. From 20 to 80 symbols can be collected, triggering modifiers for every 20 that you get. Overcharge it by 10 twice, and you get to 100 symbols, which adds 2 Ice Frames.

Using the best multipliers and modifiers available inside, you can claim a top prize of 6,000x the stake. Like most Play n GO slots, the volatility will be high, but if you’re lucky you can get a good RTP from it (96.29% is the value I’d suggest you look for).

Legend of the Ice Dragon feels like a good game, but it’s not unusual for Play n GO. They’re relying on that Charge Up mechanic, which rewards good luck and the cascading reels that could come from it. I like most things about it, provided that you can find it at a casino that uses a higher RTP.