Going by its full name, Cat Wilde and the Lost Chapter, this slot machine is clearly part of a series that Play n GO has been working on for a couple of years now. Cat Wilde is a character that is connected to another from this developer, being mentioned as Rich Wilde’s daughter. Both series have an Indiana Jones-like vibe, with plenty of ancient cultures being explored through their slots.

In this case, Cat Wilde is in Egypt, exploring the interior of a temple or pyramid. The symbols are the same ones that we’ve seen before, with Royals providing us with the initial combinations, while the high value ones rely on images of scarabs, Ankh, Anubis, or Cat Wilde. Scrolls and Pyramids are going to be the ways into the major features.

Play n GO is the creator of this slot machine. If you like what you’re seeing, then you should give the rest of the slots in this series a chance. Both Cat Wilde and Rich Wilde will be series of adventure-style games that you should check out. 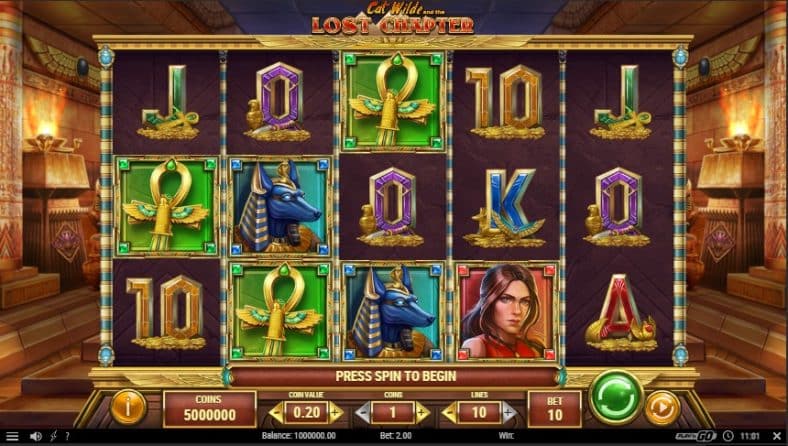 It’s not always true of slots offered by Play n GO, but in Lost Chapter you’re able to play around with the number of lines and the wagers going to each of them. With up to 10 lines to select, you can change both the coins and their values. Anywhere between $0.01 and $100 can be used in bets placed in this case.

You’re going to get at most 10 active paylines from its 5×3 reels, but this is entirely your decision. The number can be reduced, if you want to.

First of all, you will have a wild inside, which is going to be used to help out with the formation of winning combinations. Besides using it as a substitute, you can also form combinations, and you’d get paid as much as you would from the top symbol’s wins.

There are several versions for the scatter symbol, the Pyramid, but they each come into play at a different stage. The blue-colored Pyramids are going to show up during regular spins, and 3 to 5 of them will be enough to get you the free spins.

Once in this mode, you now get red Pyramids, which are both scatters and wilds. These can substitute for other symbols, but the real aim is to get 2 to 5 of them on the reels, so that you can reach the Pyramid Spins. Before then, you’re going to use a Book-style feature, with a special symbol chosen at random, and given the ability to expand on its reels. Combinations with special symbols are formed anywhere on the line, so you just need them appearing on 3+ reels.

The Pyramid Spins, if triggered, will use their own version of this scatter. Each one you get, adds 1 extra spin. The thing that’s special here, is the fact that the special symbols are now sticky, so it gets a lot easier to form those wins on all lines.

Lost Chapter will pay quite well, even up to 10,000x the stake at the end of a spin. The RTP looks fine, it’s at 96.20%, but there is also the matter of its high volatility, which is a downside, but it’s not unexpected.

All in all, I found Cat Wilde and the Lost Chapter to be a more than adequate slot machine for this series. It’s a decent game to try out, and it’s one that I’d recommend to Cat Wilde’s fans.