The idea behind the Nitropolis series is simple enough to explain, but it’s by no means common. We’re talking about a city of the future, in a post-apocalyptic landscape, where gangs of former pets rule the streets. The third game of the series takes us to a beach nearby, but with toxic barrels sitting nearby, so it doesn’t look as idyllic as that scene would be in other slots.

Now, to get back to the symbols that we’re seeing here, these come in three versions. First, we have the four low value Royals, Jack to Ace, taking the form of graffiti on walls. We then get the medium symbols, with the names of the four gangs, the logos for the Rogue Rats, Pug Thugs, Gritty Kitty, or Dirty Dawgs. The four premium symbols have images of the four types of pets that populate those gangs (Rat, Pug, Cat, Doberman).

The Nitropolis series is just one of several that ELK Studios has released so far, and I’ve been pretty happy with most of them. Whether it’s the Gold series, the Toro slots, or the post-apocalyptic city of Nitropolis, they’ve always placed a big emphasis on graphics and features, and that made their games excellent options for most players. 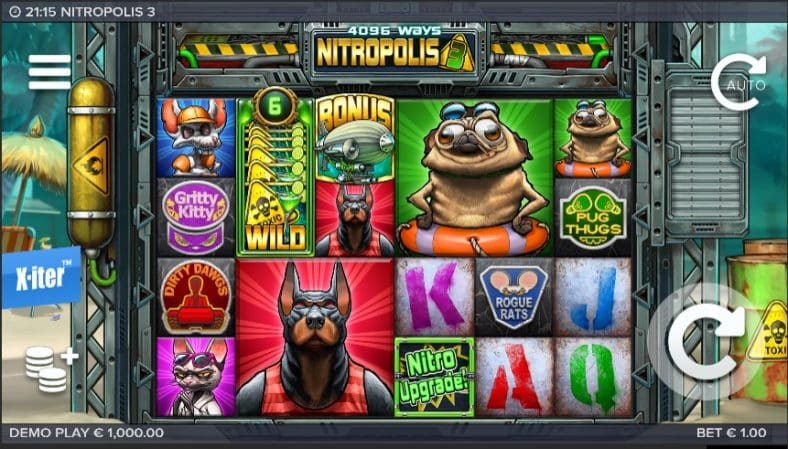 Its game area offers 6 reels of 4 symbols each, with a total of 4096 ways to win. Thanks to the Nitro Reels, double-stacked symbols which count as up to 12 matching symbols, the reels can expand in a major way. More on that below.

The Nitro Reel is a symbol which lands on two positions (it’s stacked), but which contains between 4 and 12 regular symbols of the same type. Rather than count as 2 symbols, the Nitro Reel count as up to 12, so this increases the number of potential ways to win.

Additionally, this game also uses big Nitro Reels, which give you up to 6 symbols of 2×2 positions (while they occupy 6 symbol positions at most).

Big symbols are larger than the usual ones, even up to 4×4 positions being occupied by one of these.

After you’ve formed any winning combination, an Avalanche will always follow. This makes all regular symbols explode, which allows new ones to drop down. At the same time, the game area expands with one extra row at the top. Up to 8 rows can be available eventually.

A Toxic Sign Wild will be present in the game, ready to be used as a substitute whenever it is appropriate. It’s a replacement for regular symbols only, and it can come in both regular and big versions.

Several random symbols/modifiers can show up. Some may bring you wins both ways, others will remove all regular symbols, upgrade Nitro Reels, or transform them into other types. You can also get Nitro Wilds this way.

The main feature is going to involve 8 to 20 free games, triggered through 3 to 6 Zeppelin scatter symbols. A big advantage is that the Nitro Reels are sticky in this mode. That, plus once the reels have expanded to a certain size, they can’t go back to a lower one.

If a Super Bonus symbol contributed at the start, the game area is at its maximum size and the combinations will form both ways.

A top jackpot of 50,000x the stake is the promise here, which sounds amazing. While the volatility will be high, it’s the 95% RTP that bothers me most.

Nitropolis 3 is a pretty good game overall, especially if the series is already known to you. The 95% RTP is the only major downside I see, otherwise it offers enough unique features and mechanics to be fun.