Wondering what the future of our cities looks like? According to Nitropolis, a new Elk Studios slot machine, it’s going to involve gangs of different types of pets, which fight over nitro fuel and race each other in the streets. Perhaps not the answer that you were expecting, but it makes for decent entertainment in a slot machine.

It’s a game with a mix of dystopian and cute graphics. You have the city on one hand, and the dark-looking game area, but then there are the symbols to consider as well. Those include Royals which look like they were painted on walls, while higher value positions get the different types of cats and dogs (Pug Thugs, Rogue Rats, Dirty Dawgs and Gritty Kitties). Each of them appears to have a logo on the reels as well. The Wild is the one showing what happened with all the humans, as the logo’s background is that of a nuclear mushroom cloud.

Launched by Elk Studios, the game is a bit different from past titles, but that’s mostly about the theme being used, not the quality of the design or the features which are implemented. Well thought out, with the attention to detail obvious, it feels like one of their usual games. 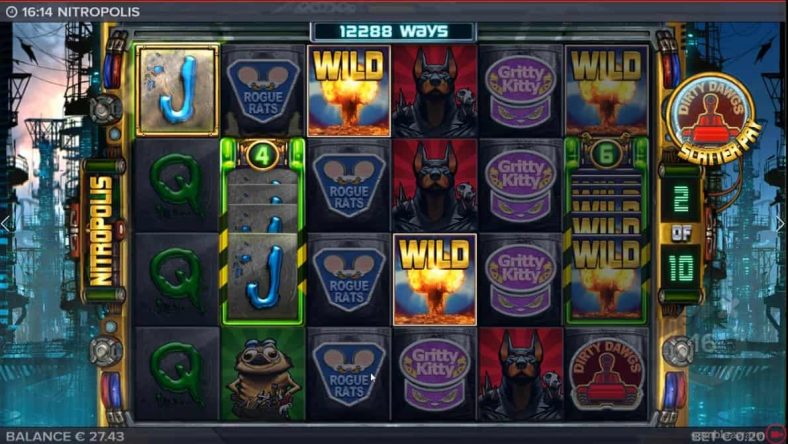 Elk doesn’t change much when it comes to betting. $0.20 is the starting point, and $100 is the upper limit, in most of their slots. 100 coins being used, you end up with coin denominations of up to $1.

You start with 4,096 ways to win on its 5 reels, but as the reels have the ability to expand, there is incredible potential there, for up to 85,155,840 ways to become available.

The big new feature of Nitropolis is the one they call Nitro Reels. It will involve Nitro symbols, which land on the reels and then give the reel an extra number of symbols (and ways to win). Up to 12 extra symbols are added to the reel, thanks to these new symbols, which are stacked and take over two positions.

If a win forms, and a Nitro Reel is involved, then you get a re-spin feature to trigger. If the wins continue to come, the re-spins keep going as well, until that is no longer the case.

Nitro Reels can also be upgraded at random, during free spins or re-spins.

As a spin ends, you may also get a random re-spin of the Nitro Reels, if the round had not wins in it. This is the Second Chance.

Nuclear Mushroom Wilds will be there to assist, as substitutes which can take part in any new combination that you’re forming. They also pay the game’s biggest prize, if you get them on enough reels to form a combo of their own.

Bonus Symbols are also important, as they’re scatters which you need landing 3+ times, so that you can reach the free spins. Here, you’re playing with locked Nitro Reels. There will also be a randomly chosen bonus symbol, which will have the ability to pay you as a scatter.

Nitropolis mentions an incredible reward, of up to $1,000,000, which would be the equivalent of 10,000x the stake. It’s a good prize, don’t get me wrong, but for a game with more than 85 million ways to win, it seems like they could’ve made it more exciting.

RTP looks fine the way it is, at 96.10%, though some Megaways slots do much better, so the competition has an advantage there.

Nitropolis does look like a very interesting option, a slot machine that you can enjoy thanks to all its cool features, and it doesn’t do a bad job with its top payouts and story either.