One of the popular boy bands of the late 90s, NSYNC was also the jumping ramp for Justin Timberlake, the most well known musician out of those that were part of it. It disbanded eventually, but now its fans have the option of playing this branded slot machine from Play n GO. It does a good enough job for a branded release, with well-done drawings of the band’s members being found among its major symbols. Besides the five symbols with the members, there are also four symbols with card suit icons. The background, as you’d expect, shows one of their concerts and the fans that are dancing next to the stage.

You can expect Play n GO to be a good source of gaming content, and a lot of online casinos are going to carry their titles. They’re very well done, the features tend to have something special in each case, and more often than not they pay a fair amount as well. 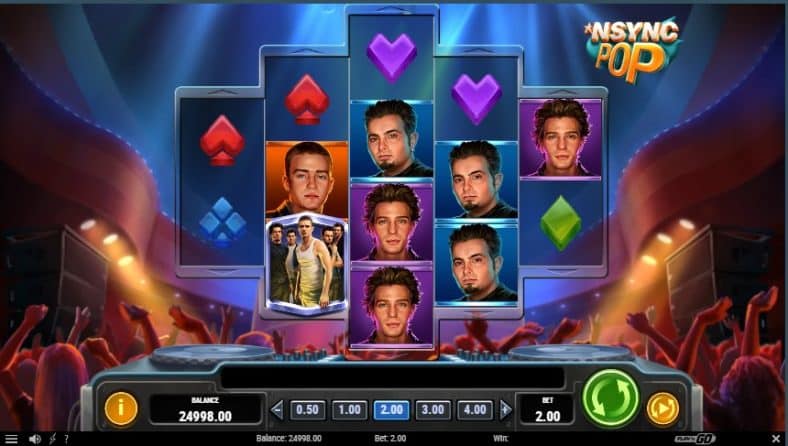 It’s not a huge betting range, but you still get the option to spend anywhere from $0.10 to $10, on each spin.

What you’re offered in exchange, is a setup with 5 reels that get 2-3-4-3-2 symbols on them. This allows for 144 ways to win to be deployed, which should give you plenty of opportunities to form those winning combinations.

The wild symbol is the one that shows all members of the band together. When it forms combinations with other symbols, it’s because it acts as a substitute. Otherwise, it’s also possible to have up to five wilds lined up to create a combo which pays up to 10x the stake.

When you get a Pop symbol on the reels, you will find that the game uses it as a mystery position. It gets turned into a random symbol.

The scatter symbols are responsible for the free spins, and you will need the triggering positions to be found on the middle three reels at the same time. In exchange, the game gives you 8 free games.

What’s different about this feature, is that Pop symbols are placed at the top and bottom of all reels. Get a Pop symbol on a reel, and those Pop positions are unlocked and turn into regular symbols. They will be used for the rest of the free spins as extra symbols, which adds to the ways to win.

At most, the game area can deliver 4-5-6-5-4 symbols, and that means that you can go from 144 to 2,400 active ways to win. The Encore Spin is offered if the entire game area is unlocked, and it’s a round with low symbols removed and with sticky wilds present.

The free spins also get Pop Wilds, which are going to be locked in their position, being used both as substitutes and to unlock the Pop positions.

NSYNC Pop is considered a slot machine that has high volatility, but it’s mixing it up with a 5,000x top jackpot. That’s not a bad prize, but it’s not great either. You want the RTP value to be at 96.20%, as the rest of the options from its range will be much too low.

NSYNC Pop manages to give the player a good selection of features, but most of all it’s going to be appealing for those that were fans of the boy band when it was still around, over two decades ago.