The jungles of Amazon are beautiful, but also extremely dangerous places. Lots of wild critters found a home there, and some of them can get pretty crossed if you discover their dwelling places. Panther is the ruler of the jungle, being the regular icon that pays the most.

Your main task will be to discover Emeralds with Snakes around them because these are Scatters that trigger free spins. Gamers can expect up to 22 freebies at once. Thanks to the Wild Spray feature, up to 10 Wilds can appear on the reels in a single spin during the base game.

The Wild Spray is also active during freebies. Winning combinations in the Free Spins feature trigger respins, with winning icons locked on their positions until respins are over. 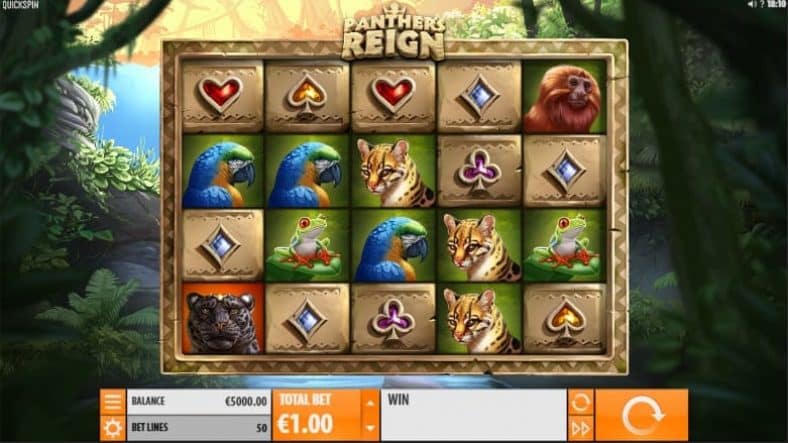 Quickspin is yet another software developer coming from Sweden. Despite the fact that the company was founded in 2012, most members of their team are industry veterans and have years of experience working in major companies in the iGaming business.

That is probably why the Swedes made such a big group of loyal followers in such a short period of time. With quality over quantity being their moto, Quickspin has won plenty of awards so far, including the Mobile Gaming Software of the Year at EGR B2B Awards in 2014.

The reels are set deep in the jungle, overlooking the mighty Amazon river, and, as you spin the reels, you will hear only the sounds of the river and exotic birds and critters. Watch your step, because, even though they are beautiful, some of the animals out there are extremely deadly.

The Panther with a crown is the ruler, as well as the icon that pays the most. Jaguar is next in line, followed by the Monkey, Parrot, and the Frog. Low-paying symbols are represented by card suits carved in stones. The Golden Rock scratched by a Panther is the Wild that will substitute for all regular symbols, while the Emerald and the Snake represent the Scatter that triggers the Free Spins feature.

Since the Quickspin title is located in the jungle, the rules of the game are as easy as possible, simply to help gamers concentrate on the perils that surround them. The 2020 release features five reels, four rows and benefits from 50 paylines, which pay left to right, starting from the leftmost reel, with three of a kind being the minimum for landing payouts. The betting range is pretty wide, so it will suit both penny punters and high rollers. Wager from $0.10 to $50 per single spin.

First of all, we will mention the WIld Spray feature, which is triggered randomly during the base game. Players can get from 3 to 10 Wilds on the reels during any of the base game spins. The Wild Spray is also active in freebies, which are triggered by three or more Emerald Scatters.

Three Scatters will get you 5 free spins, while every additional Scatter that lands will get you an extra freebie, up to 22 possible. The sad part of the story is that the feature cannot be retriggered. During free spins, the WIld Spray feature will add up to 7 Wilds on each freebie.

Finally, there is the Respin feature, which is triggered after every winning spin. Basically, all winning symbols are locked into place, while other reels respin. Respins continue until no more new winning icons appear, or until you fill the reels with winning symbols.

If you are prepared to risk your lives in one of the most dangerous jungles of Amazon, you are looking at a potential maximum payout of 5,202 times the bet, which is quite nice, especially if you are ready to set the bet to the max.

The Panther will reward you the most, offering 100 times the bet for five of a kind. You can expect the biggest wins during the Free Spins feature when you fill the reels with winning icons with the little help of respins.

We have visited the jungles of the Amazon plenty of times, and we can say with certainty that, for us, Panther’s Reign is one of the most exciting adventures in this part of the world, despite the fact that the theme of the game is very common.

The Wild Spray feature will prove to be very handy during the base game and the Free Spins feature, when you get all of those Wilds on the reels, while the Respin feature will help you boost your wins by locking winning icons on their positions. Play your cards right and you will walk away with up to 5,202 times the bet in a single spin.