Farming piggy banks is an absurd idea, and yet Play n Go made it work in this slot machine. Piggy Bank Farm has a farm theme, and most of its symbols will support that idea. However, there is some Piggy Bank farming as well, and it’s apparently the farmer’s idea to plant plastic and gold, in order to get them.

Its special symbols will include the Piggy Bank, Hammers, the Farmer Wild and the Gold Coin scatter, while the regular positions will range from cows, to dogs, sheep and chickens. Lastly, once you get to the Royals, you discover the positions from 10 to A, each one made out of wooden planks in a different color.

It’s an excellent design, very high quality and modern, a pleasure to look at as you’re trying for the big prize.

Play n GO created Piggy Bank Farm and it’s just one of dozens of excellent slots that they launched in 2020. A game with gorgeous graphics, plenty of special features which feel unique, and above average prizes, these are all marks that they seem to hit with every new slot they launch. 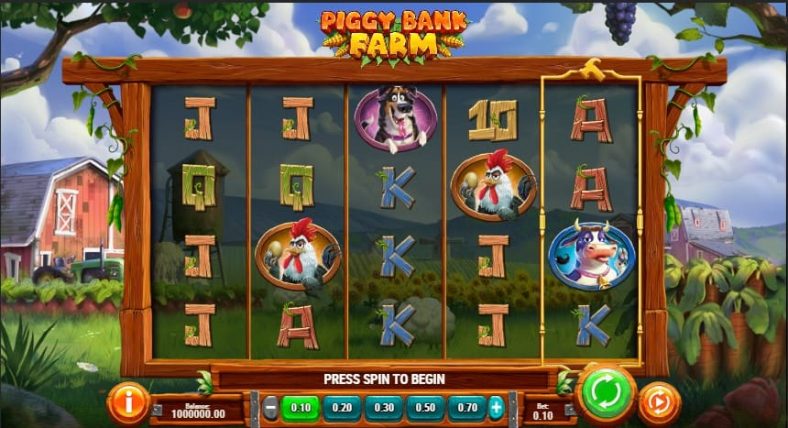 Played with 5×4 reels, there is ample room in the game area for the 50 lines which are active. Wins are formed with symbols of the same type, when they land in sufficient numbers (3 or more), on the same line, and starting from the leftmost position.

There are both big and small features to look forward to. Among the latter, I’d mention the Farmer Wild, which you’re going to use when you’re forming new combinations, either its own or regular ones. In the latter case, it’s a substitute.

Should the Hammer scatter appear on reel 5, you get access to a bonus game of the Hold & Spin variety. Involving 3 rounds, you collect Piggy Bank symbols if they appear, and you get paid at the end of the feature. If they appear next to each other in certain forms, they merge, and occupy 2×2 to 4×4 positions. The bigger the area occupied by such a symbol, the higher it can go with its reward, within a given range. You could end up occupying the entire game area, and that would pay 500x the stake.

With regular scatters appear on three reels (1, 3, 5), you get 8 free games. Hammers can now land on all reels, so it’s easier to trigger the bonus game. Even better, the number of such symbols decides the multiplier for the bonus, and you can get a boost of up to 10x to wins (5,000x total).

With the right feature coming along, and at the right time, you have a chance to win up to 5,000x the stake. Even the regular combinations can pay a decent amount though, since a combo of five wilds offers 50x the stake, and there are 50 lines for it to show up on (2,500x the stake potential).

It should also be noted that this slot has a 96.29% Return to Player, but with High volatility.

Piggy Bank Farm can be fun, and the graphics definitely help with that in the long run. It’s also a fairly typical release for Play n GO, offering big rewards and high volatility.