If you’re looking for big paylines and fantastic wins, you’ve come to the right place. After all, it was this combination which made MegaWays as popular as they are! It seems like NextGen is planning to eclipse even that, if this slot is anything to go by! Excellent special features combined with an epic Norse theme come together to create an amazing game.

Players are treated to a view of the rainbow road leading to Asgard, and the mighty gates which block access to this holy Norse site. But you won’t be able to get past these proud walls. Instead, you get to watch them grow taller as certain bonuses activate! As the reels grow, the screen is forced to zoom out slightly to keep you focused. And when it does, you get to see more of the gorgeous background image.

Available special features include Wild multipliers, free spins with an expanding reel, a Wild stack, and a bonus purchase special feature. The strength of your wild multiplier increases or decreases depending on how many Wilds are present. Furthermore, you can expand the playing field even more by collecting Scatters during free spins. If a reel is fully expanded, you receive additional free spins. 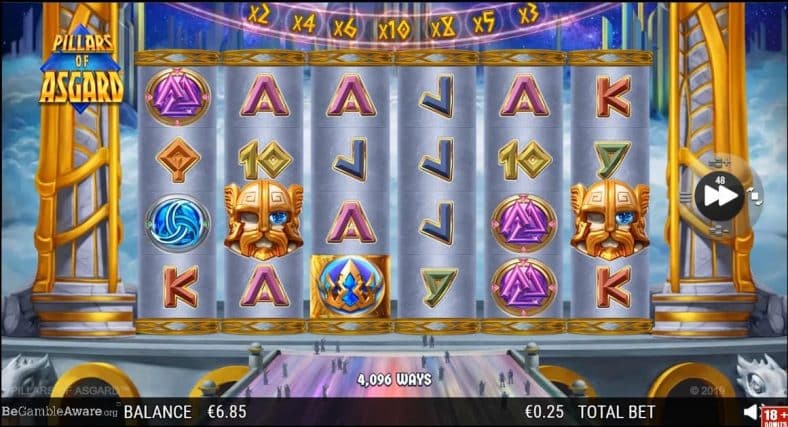 NextGen Gaming launched operations in 1999, primarily as a B2B operator. They licensed their games to other online casino software providers, which gave them a boost in attention. The team wouldn’t enter public spotlight until 2014 with the release of 300 Shields. From there, the developer was able to successfully manoeuvre and expand their business!

Pillars of Asgard is initially played on a 6×4 board with 4096 ways to win. As certain special features activate, the number of rows increases. A fully expanded reel is a massive 6×10 playing field, with 1,000,000 ways to win available! Gamblers can wager between $0.25 and $10 on each spin.

The layout is clearly designed to work for both desktop and mobile users. All the buttons are pushed to the sides of the screen, rather than using a more traditional desktop user interface. It’s a bit too clumped on computers, though it’s something you can fix by zooming in a little bit.

To use Autoplay, tap the button to the right of the Spin. It will open a menu where you can choose the number of auto-spins to be played. Sadly, it doesn’t seem like NextGen Gaming have enabled any additional autoplay functions like win and loss limits. What you see is what you get!

Symbol designs are distinct from one another, making them easy to recognize at a glance. It doesn’t seem like a big deal at first, but it’s very important when the reels expand and the size of each icon is much smaller. Keep a special eye on the bearded helmet and the crown, as they are this slot’s Wild and Scatter, respectively.

Every time a Wild is part of a winning combination, it will increase the prize by a randomly awarded multiplier. Which multiplier you get depends on how many Wilds are present on the screen itself. With just one Wild, you can get a multiplier between 2x and 10x. While with four Wilds, the range narrows from 5x to 10x! The more Wilds you have, the higher the multiplier range will be. You only receive one Wild multiplier per winning combination.

Three or more Scatters award twenty free spins, with an expanded playing field. Each additional Scatter adds an extra row, and increases the number of ways to win. For the best result, collect six Scatters at once, which adds four rows for a total of 262,144 ways to win! Furthermore, each Scatter that appears on a reel during free spins will add to that reel, for a maximum of ten rows.

And if all reels reach their ultimate size, a fully stacked Wild will replace one reel for the remainder of the free spins bonus.

This game has a high volatility, and has a jackpot worth 25,000x your total stake. NextGen Gaming’s release has an RTP of 96%, which is the current industry average.

The key draw of Pillars of Asgard is in its expanding playing field. The ability to get up to 1,000,000 ways to win is a staggering achievement for slots! The high variance makes it a bit rough to score any substantial win. But if you do manage to succeed, you’ll be well rewarded for your troubles!