Talented craftsmen of NextGen Gaming have created a phantasmagorical environment and transferred it to the video slot named Rise of the Mountain King. Inspired by the Nordic landscapes and mythology, this game features alluring graphics with images of surreal mountain peaks and monumental castles on top of them.

This mysterious kingdom stands so high in the mountains that their residents look down to see the clouds. The reels are entirely transparent, providing an unobstructed view to the beautiful landscape behind. The symbols are various creatures and objects recognizable from the genre of epic fantasy.

Rise of the Mountain King 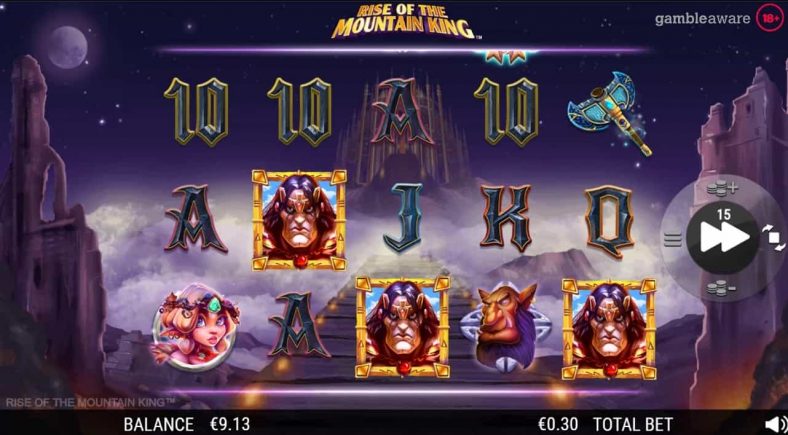 They have seized the moment and established themselves as one of the industry leaders. Always on guard, NextGen has sensed the next huge blow that came with the introduction of smartphones. As the games were moving to the smaller medium – touch screens, NextGen was ready to optimize its games and make them enjoyable on the go. So far, they have managed to justify their name – always looking one generation ahead.

A set of 10 beautifully designed regular symbols, supported by equally attractive but more valuable Wild and Scatter symbols, populate the 5×3 layout. 30 paylines are fixed, and winning combinations are created with a minimum of 3 matching symbols distributed on a payline on adjacent reels starting with the reel 1.

Each winning combination is followed by beautiful graphics connecting the symbols that belong to it. After each win, the players are tempted to try to boost their gains in a Gamble game. Guessing the card colour doubles the outcome while guessing the card suit quadruples it.

Of course, if you miss the win is lost. The navigation bar is user-friendly providing quick access to the game settings, bets, spins and automatic spins. The Autoplay option has a limited number of automatic spins that cannot go over 100. There are 14 bet levels, and they range from $0.30 up to $15.00.

NextGen has made sure no one will be bored while playing their game. Rise of the Mountain King is a feature-packed video slot. Starting with Gamble feature that can be used after each win, the bonus feature will never lose their rhythm. Three or more Wilds appearing during the main game activate the King’s Re-spin feature. Scatter that has showed up will turn into Wild and one Re-Spin is awarded. Just one, but very, very special Re-Spin. King Reels spin over the triggering symbol positions as an overlay. Any new Wild that appears will award another Re-Spin.

Land 3, 4, or 5 Scatters anywhere on the reels during the main game to activate 8, 9 or 10 Free Games, respectively. Each contributing Scatter along with the ones appearing in free game are collected in the Collect Metre. Not only that each new Scatter means new free spin, but also, they make the Metre increase the Multipliers. If you reach the maximum of Level 6, your Multiplier will rise to 100x!

Additionally, you can be allowed to buy the Bonus feature using Buy Pass option. Again, you can test your luck with this option as well – either buy for 100x your bet or take a chance and try to get it half price.

With such a feature-rich game and various ways to boost your wins, it is almost impossible to count the exact maximum win. The multipliers in the Free Games can make each win 100x bigger than initially defined. The Gamble feature allows you to try to double or quadruple the wins. This is why the game manufacturer has set the limit of maximum payouts to 250,000 euros.

A hugely entertaining game, Rise of the Mountain King by NextGen Gaming goes beyond regular slots and gives the controls to the players. With options such as Gamble, the players can either keep the wins or try to boost them. Also, the Buy Pass feature gives you a shortcut to the Bonus features but has its price.

Having all this in mind, Rise of the Mountain King is fun to play but can be very volatile. It is therefore recommended to consume the game easily. Otherwise, you better be an adrenaline junkie. When it comes to graphics, there is absolutely nothing to complain about, since this NextGen product satisfies even the most spoilt players out there.