Have you ever come across a slot that made you pause? It’s a rare sensation for us, and it only happens when a game completely defies our expectations. Usually, it means we either praise everything about the release, or completely smear it. But Pirates of the East doesn’t really give us the option to do either one. It’s just there, existing solely to baffle us that NetEnt would release something like this in 2019.

No matter what way you look at it, these graphics are super basic and outdated. The reels take up the majority of space, and the only interesting thing about them are the cannons on each side. In the distance, you can make out a few small islands. There are clouds above the ship, but they look super low-res.  As far as appearances go, you’d think this slot was launched in 2009!

We were hoping special features might come in to save the day, but that was a bust, too. You have access to a Wild which applies a 3x multiplier to any win it is a part of. And a free spins round where you can choose between various combinations of free spins and multipliers! It essentially allows you to choose the volatility of your bonus round, which is a cool idea.

Pirate from the East 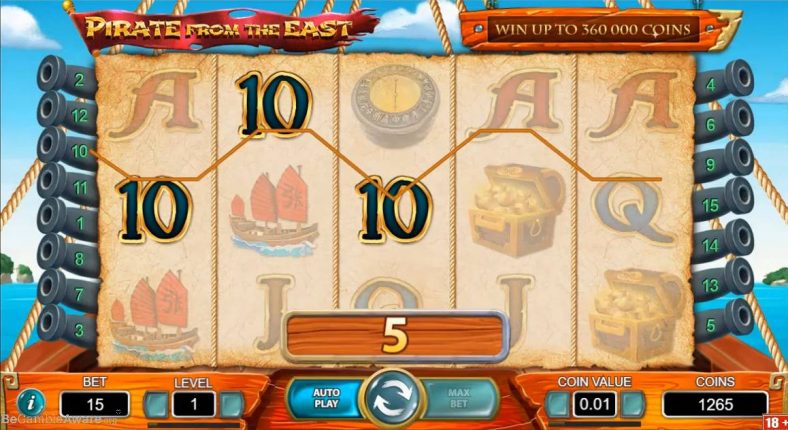 NetEnt has been part of the online gambling world for over 20 years now. In that time, it has achieved phenomenal success, launching smash hits like Starburst, Gonzo’s Quest, Arabian Nights, and many others. Today, the company employs over a thousand employees from all over the world, and has swept more awards than they can count. Other developers may come and go, but NetEnt has remained on top through thick and thin.

This game is played on a 5×3 board with 15 fixed paylines. Players can adjust their wagers by changing their bet level and coin value. Gamblers can set their total bet between $0.15 and $75 on each spin. A solid betting spread for the number of paylines it offers!

The core NetEnt layout remains the same, though the colour scheme has been drastically altered. Gone is the subtle, see-through grey we’re used to. Instead, the user interface looks like it’s made out of wood, with cyan buttons to perform various actions like spinning or changing bets.

Of course, a deeper look will show the layout changes are just skin deep. Open Autoplay, and the familiar grey menu will return. Here, you can select the number of auto-spins, as well as configure other elements of the Autoplay feature. Gamblers can set a win and loss limit, as well as a single win limit. You can also choose to stop auto-spins if any win occurs, or if free spins are triggered.

Symbol designs suffer from the same lack of detail as the rest of this release. None of the icons look that bad, but we’ve come to expect much better from NetEnt. Especially for the Wild and Scatter symbols, which look like they’ve been drawn in a rush. The highest paying icon is the chest full of gold, worth 2000 coins for a five-of-a-kind win.

A Wild can appear in any position on the reels. It also comes with a 3x multiplier attached to itself. To make use of this multiplier, you have to create a winning combination with a Wild. Not that difficult of a task, since Wilds can substitute for any symbol except for Scatters. Multiple Wilds do not increase the multiplier increase of your prize.

Pirate from the East has a medium volatility, and a jackpot worth 2400x your total stake. The slot has an RTP of 96.38%, which is above the current industry average.

Honestly, we have no idea what the design process behind this game was. The special features aren’t bad, but they’re incredibly simple. Both in gameplay and graphics, this release reminds us of something NetEnt might launch ten years ago, rather than today. If you enjoyed older stuff this developer put out, this will be a nice nostalgia trip. For everyone else, you’re better off skipping this one.