Play n GO’s latest slot machine is Puebla Parade, and they’ve dedicated it to Mexico’s cheerful nature, one which involves dancing, lots of music, and just having fun in general. It’s a great thing to be known for, and this game does a decent job at delivering images of various things that we associate with their holidays and parties.

As such, some of the lesser icons get the Royals, apparently made out of colored paper. You then get the interesting icons though, every image being associated with Mexico’s parties or delicious foods. The dip bowl, a filled tortilla, a blue guitar, a skull mask, and a donkey pinata, all these will be included in the premium symbols.

Coming from Play n Go, this slot machine is just one of the many options available to you there. Hundreds of excellent releases are part of that collection, so you get your pick of a game that fits your style and theme preferences. 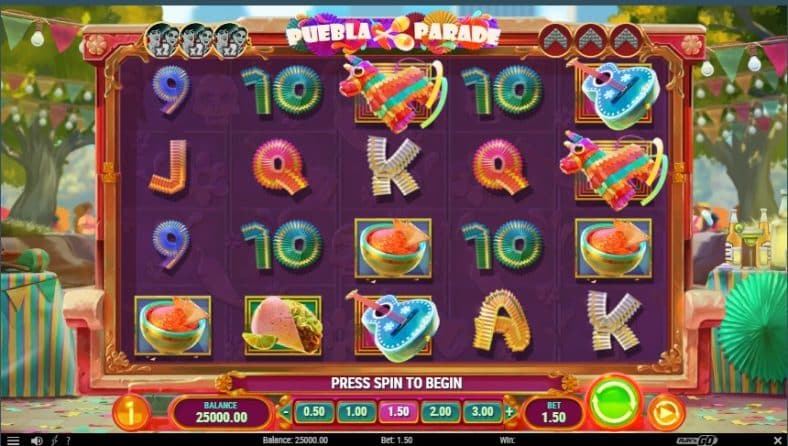 The usual list of bet options is at the bottom, with five values shown at any one time. Navigate to the left or right with the arrows included, to spend anywhere from $0.05 to $100.

It’s an interesting system, with 5×4 reels that will host only Connecting Paylines (up to 421 lines when the game area expands to 5×7 reels). What this means is that you can’t form a combo with symbols that are separated by more than one position from one reel to the next. They need to be either adjacent, or they need to touch diagonally.

There are two types of wilds, with images of the Senorita and Senor. When these show up, they are used as substitutes for one, but that’s not all they do. These wilds will also work together then they appear at the same time, triggering 2 respins.

During the respins that come next, you have the two wilds walking around the game area at first, and then merging into a single Pareja Wild. At this point, the wild applies a 2x multiplier.

Should new wilds appear, the number of respins goes back to 2, and the game area also gets a boost (1 extra row). With enough of these Pareja Wilds formed, the game area will go up to 5×7 reels, and there are quite a few respins to use them in.

The other major feature which they’ve implemented, is called Bailar Free Spins. You need to take the respins to their max level, and form all 3 Pareja Wilds that are possible, in order to reach this stage of the game.

For this mode, 3x multipliers are applied by each of the Pareja Wilds, which dance around the reels until you’re done with the free spins. You’re also using the same expanded game area that you obtained during respins.

In this area, it feels like the slot’s offer is a natural one. You’re not going to be amazed with a 5,000x jackpot, especially since the volatility is high. On the other hand, it’s not an uncommon jackpot level, and the RTP reaches a max level at 96.20%, so it all works out.

Puebla Parade might be just one of the many Mexican party themed slot machines, but it feels special. Thanks to its unique take and its focus on dancing, along with the mix of features that they implemented, I think it can be a fine choice.