Rich Wilde and the Shield of Athena Slot Free Play

Play n GO has built a decent part of their collection through the Rich Wilde series, one of their most popular group of slot machines being centered around this adventurer. For this particular game, they’ve taken the action to Greece, where we see Rich explore the myth of Athena, along with his daughter, Cat Wilde. The background image and the general surrounding graphics fit well with the Greek theme that inspired this game.

The symbols that you get inside are a mixed bag, with less appealing Royals which appear to be made out of colored stone, along with more relevant icons. The latter include a Shield of Athena, along with her Helm, a Ring of Wisdom, a Pendant and an Owl. Both Rich and Cat Wilde are used as feature symbols.

Rich Wilde and the Shield of Athena 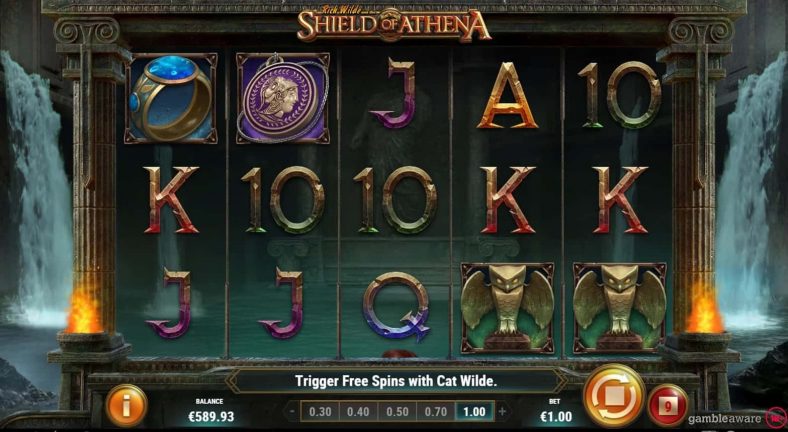 Rich Wilde and the Shield of Athena Slot Free Play

Play n GO, a giant of the online gaming industry, has released hundreds of excellent slots over the years. They’re based in Sweden, same as many of the other top companies that are known for offering great games. Things that I often appreciate about their slots, include the higher than average volatility and the payouts which tend to be at 5,000x or higher. The high quality graphics and their use of plenty of features help as well.

You just pick the amount that you want used in your bet, that’s all, and you can start the game next. The wagers available to you are going to have a range of $0.10 to $100, and in exchange the slot gives you 10 lines.

The 10 paylines of the game are present on 5×3 reels. It might be a game with higher volatility and lots of risk, but it’s not a difficult one to figure out, and the usual features are used.

One of the available feature symbols, the wild will show up with the image of Rich Wilde on it. It’s a substitute that will also create winning combinations of its own, which will pay as much as 1,000x the stake per line and up to 10,000x if they take all positions on the reels.

The other features include both respins and free spins, with the former triggering at random. It will transform a Shield of Athena symbol into a wild, and then it will give you respins. All Shields present are used as wilds and become sticky for this feature. If additional Shields show up, the respins keep retriggering. If there are any regular wilds or scatters that land, they too are turned into Shields.

Cat Wilde is the other feature symbol that you can get on the reels, a scatter that activates 10 to 15 free spins called Medusa’s Gaze, just by being present 3 to 5 times. In this mode, Medusa’s Respin is always active.

Rich Wilde and the Shield of Athena has been described as a slot machine with a lot of volatility, in fact it’s described as a 10 out of 10 by Play n GO, so it’s the highest that they’ve gone so far. You do get bigger payouts than usual as well, particularly at the top, where the potential reaches 10,000x the stake.

Naturally, though the game is less balanced this way, and there are more players that lose in order for a few to get bigger rewards, the RTP is still OK, at 96.25%.

Rich Wilde and the Shield of Athena is a worthy addition to an already long series, with exciting features and very high volatility, but also with an above average top jackpot that it can deliver.