Everyone goes through their rebellious teen phase at some point. It’s only natural! But it’s a lot more complicated when you’re supposed to be pulling Santa’s sleigh, and it’s only a few days from Christmas! In NetEnt’s Christmas-themed slot, Santa and his most loyal helper seem to have entered a mild spat. And the only way to solve it is with a good, old fashioned brawl!

While we wouldn’t call this game gorgeous, it still has its unique Christmas charm. The whole thing looks like one giant cartoon you might catch playing on TV! We’re used to stellar animations and pretty background images from NetEnt. Seeing them re-affirmed in this release just showed us that the Swedish developer hasn’t lost their touch.

Available special features include two types of Wilds, which dictate what special features you’ll get! When these two Wilds meet, they award free spins. Then, depending on how many Santa or Rudolf Wilds you collect, you fill up one of two meters. When a meter fills, you unlock either Rudolf Spins or Santa’s Gifts bonuses! 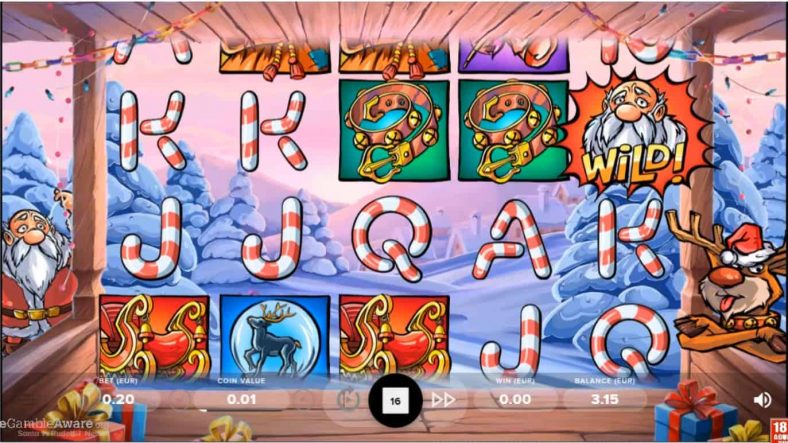 Is there anyone who hasn’t heard of NetEnt before? The developer has been in business for over twenty years now, and has been instrumental in shaping the industry. With over a thousand employees spread across several countries, the team has a global presence. But more talent is always good, which is why they recently acquired Red Tiger Gaming. We can’t wait to see what the future brings for this Swedish developer.

You play Santa vs Rudolf on a 5×3 board with 20 fixed paylines. Players can change their total bet by adjusting the coin value using the up and down arrows. This allows gamblers to wager between $0.20 and $400, which is a fantastic betting spread!

This slot uses NetEnt’s fancy new layout. Apart from the changes on how you make your wagers, it also comes with a sleek, semi-transparent look. The redesign is clearly primarily aimed at mobile devices, but it doesn’t force the same user interface for both phones, tablets and laptops.

The software provider also kept their great Autoplay function while giving it a fresh coat of paint. Now, you must choose the number of auto spins first. Only when you select that can you make changes via the Advanced Settings menu. There, players can set win and loss limits and single win limits. They can also force auto-spins to stop on any win or if free spins are won.

Symbol designs are kept simple and recognizable. The playing card royals have received a holiday makeover, and are now made of Christmas candy canes! Other icons include a letter for Santa, a reindeer in a globe, reindeer reins, Santa’s bag of gifts and the famous red sleigh. Santa and Rudolf are both Wilds, and can substitute for all symbols.

During free spins, two meters will appear above the reels. Each meter fills when the corresponding Wild appears on the board during free spins. If one of the meters is filled before free spins end, the associated bonus will be played.

If you fill Rudolf’s meter, you unlock Rudolf Spins. While this special feature is active, gamblers receive three spins with five randomly placed Rudolf Wilds on the board. While this bonus is ongoing, no other Wilds can appear. You also receive wins both left to right and right to left!

Filling Santa’s meter unlocks Santa’s Gifts. Click one of out of five items to unlock coin wins and multipliers. You get to do this a total of three times, unless you run into the end of stage icon.

This game has a medium-high volatility and a jackpot worth 1000x your total stake. NetEnt’s release has an RTP of 96.35%, which is above the current industry average.

If you’re looking for something bright, fun and Christmas-themed, Santa vs Rudolf is the way to go! Sadly, due to the complications in the North Pole delivery system, there won’t be any grand prizes being handed out here. A mild disappointment to an otherwise excellent slot!