One of the most popular game engines that Play n GO uses, is the Book-style one. It’s been done to death, by most developers, and Play n GO has a major contribution to this category, with a lot of their slot machines using those features. Secret of Dead is one of them, a game that’s Ancient Egypt themed, naturally, and which uses common graphics for this particular category. It also adds a 6th reel, which is about the only thing making it special for a Book slot.

After the initial five low value symbols that are showing 10 to A Royals, we discover another four premium symbols, with a Cobra, a Scarab, a Cat, and Shai (egyptian goddess of fate). As its only feature symbol, it uses the Ankh.

As I mentioned above, there will be a lot of different slot machines that have Book-style mechanics in Play n GO’s collection. If you’re a fan of this sort of game, check out their slots, and here I’d mention a couple of them, with titles like Legacy of Dead, Book of Dead, Scroll of Dead, or Lost Chapter. 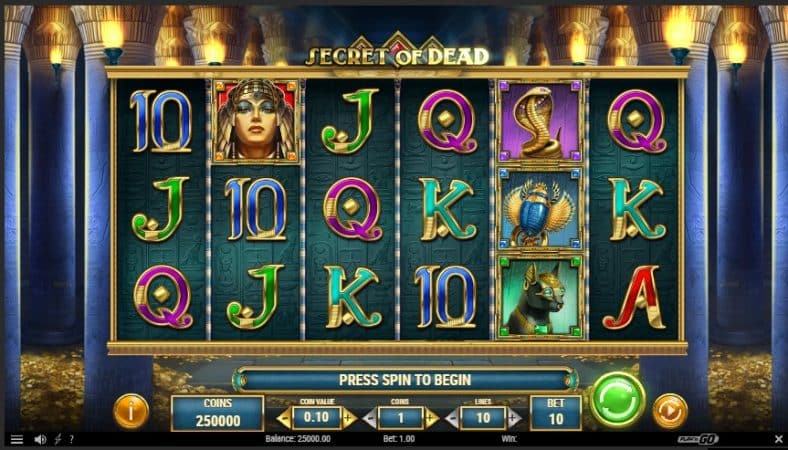 Between $0.10 and $100 can be used in your bets, depending on the budget that you’re using and on your appetite for risk. You can do this by changing either the coin value, or the number of coins selected for each line.

The setup in Secret of Dead is one of the things making this game special, even for the Book crowd. It’s got 6 reels, rather than the usual 5, but it uses the same 10 active lines otherwise.

The major symbol of the game is going to be the Ankh, which will be your wild or scatter, depending on where it lands and how many times. The same symbol can be used to help a smaller win form, when it can act as a substitute. It will pay directly when it can, as much as the top symbol.

The Ankh is also going to be the scatter, and it will serve as a trigger for the free spins when landing 3 to 6 times. It also pays 1x to 250x the stake when this happens.

In typical fashion for a Book slot, it selects one of the regular symbols, and makes it special for the rest of the free spins. This new symbol gets the ability to expand on its reels, and this allows it to form combinations on all lines at the same time. When the feature is retriggered, you gain another special symbol, and eventually all 9 regulars could be selected.

Of special note is the Shai symbol, which is not only the top paying combination, but also the one that doubles its value during free spins if it’s a special symbol. This is how you can claim a jackpot of 10,000x, with its help.

As I just mentioned above, the top jackpot in Secret of Dead is going to reach 10,000x the stake. Given the wagers involved, that could mean $1,000,000 cash. It’s also about double the amount that other Book slots will offer, though with the 6th reel in place, it’s going to be harder to get to the top rewards.

Highly volatile, this is a slot with a range when it comes to its RTP, so it could go as high as 96.20%, but it could also be lower.

If you’re satisfied with a Book-style slot whose only innovation comes from its use of a 6th reel, then give Secret of Dead a shot. Otherwise, there are better slots to check out, even from Play n GO.