A game with an African safari theme, but which will follow mostly two of the continent’s predators, the lion and panther, Serengeti Kings is not going to have a unique story to tell.

On the other hand, thanks to the way it was built, it ends up being interesting nonetheless. You have panthers or lions on the reels, along with scatter symbols or wilds, and also hyenas, giraffes, zebras and meerkats. Low symbols are the standard Royals. 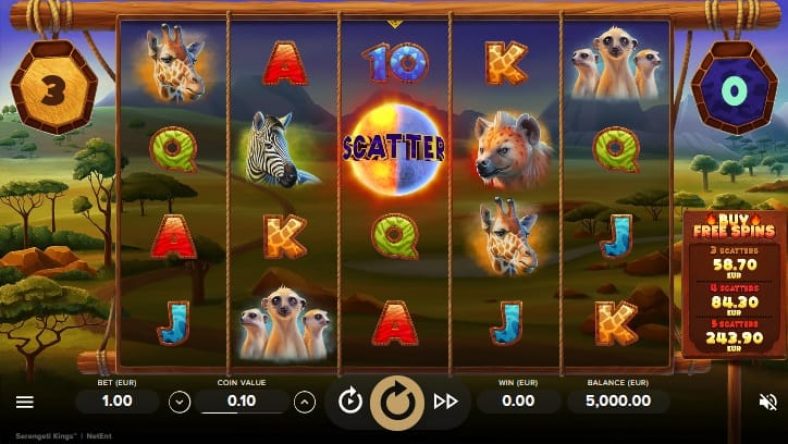 Serengeti Kings is a NetEnt release, one of the few games with high volatility that you will find from them.

The developer doesn’t have big payouts in most slots they’ve put out so far, but Serengeti Kings is an exception, so I’d recommend it for that alone. Otherwise, always count on the developer’s slots to have gorgeous graphics, that part they always get right.

You only need 10 coins for each spin of Serengeti Kings, despite the higher number of lines that are provided. The coin value is the only one that will change, and the range in its case is $0.01 to $10, allowing for a total between $0.10 and $100 per spin.

On a fairly large game area, which has 5×4 reels and 26 lines, Serengeti Kings doesn’t offer us quite as many chances to win as we would’ve liked (a 5×3 reel slot would’ve been fine for that number of lines). It’s not a particularly unique game, but it has its moments, and it shouldn’t prove difficult or boring.

It’s a fun system that NetEnt designed for Serengeti Kings. You play in two modes, with 12 Lion Spins (day) being followed by 12 Panther Spins (night). As you go through these rounds, you collect the Lion and Panther symbols which show up on the reels. There are special counters, which are used to show you how many you got so far.

Once you get to the 12th round, in either mode, there is a feature that triggers. The symbols which have been collected in that mode will be added to the reels, in random locations. Quite a few wins can form during that one spin, towards which you’re working for the first 11 rounds.

When a collected symbol lands on the beast from the other mode (Lion on Panther, or Panther on Lion), then it is transformed into a substitute. When a Lion is added on top of a Lion, or a Panther on another Panther, then the multiplier goes up by 1x (this also happens when the beats land on wild positions). You can have several multipliers added together, on the same line.

It already sounds like a fun game, but it doesn’t stop there. Serengeti Kings will also trigger 12 free spins, if you have 3 to 5 scatters on the reels in the same round. Depending on the exact number of triggering scatters, you either start with zero beasts collected, with the same number as in the initial round, or with 5 extra ones to each meter. In this mode, you once again collect beasts, and during the last spin they are added to the reels.

The game has pretty good potential, with 4,500x payouts being a possibility for it. It’s a good return, but the game is also the type to offer medium to high volatility, so it’s not without risk. RTP is at a level of 96.20% or higher, depending on whether you’re using the feature buy option or not.

You can expect a slot with higher volatility, but also with bigger top payouts and a fun mix of features. All in all, a game that casual players might not enjoy, but those that are not risk averse will like it.