Toro 7s is an attempt from ELK Studios to create a classic version for a slot of theirs that has been very popular in the last couple of years. There are actually several games in this series, which has Toro the bull as a main character, along with the Matador. As this is a 3-reel version, it’s more of a classic where the other symbols are involved, and the quality in those is not very high either.

Among the symbols used in Toro 7s, we find the Cherries, Lemons, Plums, Green 7s, Blue 7s, and Red 7s. The symbols with Toro and Matador are wilds.

The company behind Toro 7s is called ELK Studios. Established in 2012, it’s one of the many Swedish developers doing a great job with slot machine development. Dozens of highly detailed games, with great graphics and unique features, have been released since then by ELK Studios, and I’d recommend them to all types of players. 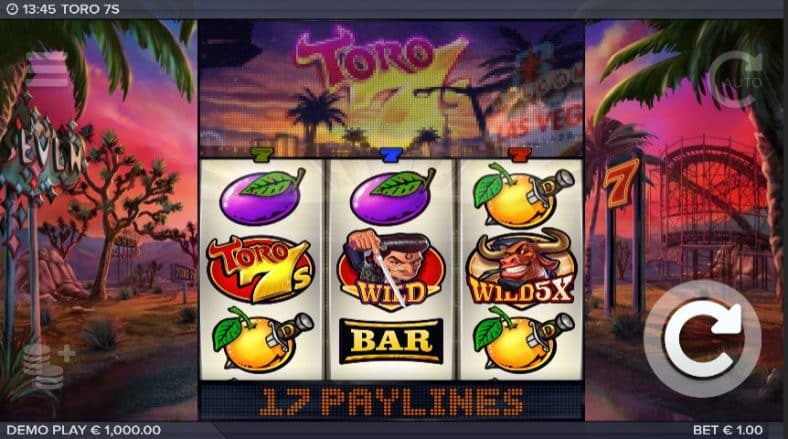 Starting with the minimum bet of $0.20, most players should easily afford to play Toro 7s. The wagers go up from there, and could reach $100, for those that have the budget for it.

The game area involves the use of 3×3 reels, and there is a system with Connecting Paylines inside, giving you 17 possible combinations/ways to win. As the name implies, you need the symbols to be connected, horizontally or diagonally (can’t form a combo with a symbol found at the top, if the next one is at the bottom of the next reel).

Matador Wilds are part of Toro 7s, and they show up on the reels, to act as replacements and to also trigger Nudging Respins. The Wild moves downwards, and eventually it goes away, but until then it continues to bring you additional respins with it present and capable of contributing to other combinations.

Toro Wilds are also used, and these are even better. They have multipliers to apply to wins, boosting them by 5x. They also trigger the Nudging Respins, and they drop one position at a time, until they leave the reels. Toro remains in its position, until the Matador leaves the reels, if they’re both visible at the same time.

The best part of Toro 7s comes from its free spins though, which require the presence of 3 Toro 7s logos scattered on the reels. A 5x multiplier will apply to all wins you obtain there. 10 free spins are awarded.

There is also a Lucky Sevens feature, which triggers when 3 scatter symbols appear while already in the free spins. You get 3 spins, but landing Sevens or winning combinations will reset the number back to 3. In this one, you need to collect certain types of Sevens for each of the three reels. The green ones are needed on the 1st reel, the blue sevens for the 2nd, and the reds for the 3rd. Eventually, as you collect enough sevens, you can claim jackpots from those reels, and even reach the top and get 10,000x the stake (5 matching sevens are needed on the right reel).

With a 10,000x jackpot, Toro 7s is one of several ELK Studios slots that could pay up to $1,000,000 cash. Even though it’s got excellent potential, the volatility is only medium, so it should be a good option for those risk adverse, but which still want a good prize to go after. Its RTP is only 95%, standard in their recent games, and that’s one downside (best would be 96% or higher).

Toro 7s is not a bad game, and I could definitely see it as an option for a player that enjoys the classic look, but wants modern features. The 95% RTP is a major downside though, one that most ELK slots share lately.