Way back in the past, when the war against the dark forces was lost, kings of several kingdoms decided to hide their vast treasures and make sure that the riches do not fall in the wrong hands. To secure the treasury, a system of halls and moving walls were built, to drive away thieves.

After thousands of years, the myth of the riches is still alive, and fortune-seekers from across the globe are coming to discover the location of the treasure chamber. The latest group consists of a Warrior and a Magician since they will need both the brute and the knowledge of spells in order to discover the treasury.

Use the Moving Wall feature, as well as the Treasure Chamber Free Spins feature to enter the chamber and fill your bags with gold. Treasure Heroes is a new five-reel video slot that offers cluster pays and is coming from Rabcat’s creative kitchen. 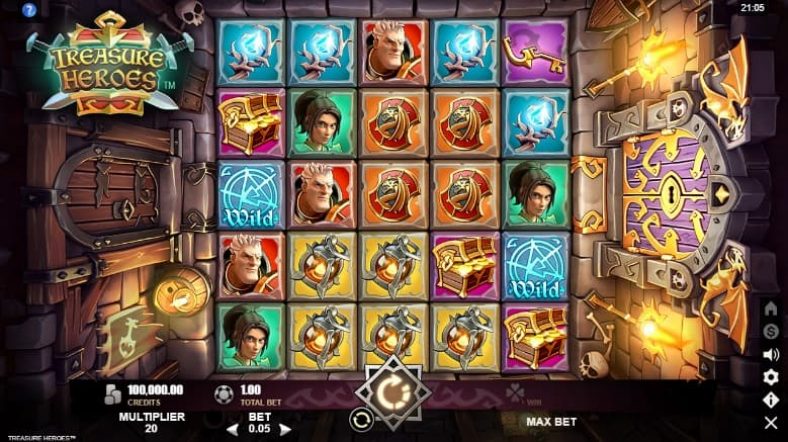 Rabcat was established back in 2001. Based in Vienna, the Austrians first started working as graphic gaming designers. It is one of the subdivisions of Rabcat Computer Graphics, the other one being Rabcat GameArt.

Rabcat made its name in the iGaming industry as producers of games that are hosted by different platforms, for example, Microgaming. Apart from video slots, which boast excellent graphics and a fitting soundtrack, Austrians also produce games like video poker and table games.

The reels are set deep underground, in one of the caves that represent the entrance of the treasure chamber. You will see two doors, but there will be lots of moving walls, so it won’t be easy for you to pass through the hall. We have already mentioned that the members of the fortune-seeking crew are the Magician, who is a beautiful lady, and her task is to break the spells left by ancient kings.

The Warrior, however, is here to guard the Magician from other thieves, or from the guardians of the chamber. The Shield and a Magic Stick are also among the symbols that appear, and you will definitely need a Lantern down there. The Treasure Chest is your main goal, being the symbol that pays the most. The Wild will substitute for all regular icons, while the Key is the Scatter that triggers freebies.

The 2020 release features five reels, five rows and benefits from cluster pays. Form a cluster of 6 or more symbols connected vertically and/or horizontally to start landing wins. The Moving Wall feature will be activated after every winning spin, and it resembles a respin. Betting is fixed at 20 coins per spin, but the coin value can be altered, so you can wager as low as $0.20 and as high as $40 per single spin.

The Moving Wall feature is triggered after every winning spin. After you collect your wins, the reels and rows will start moving. First, we have reels 1, 3, and 5 will move in random directions. Once they stop, rows 1, 3, and 5 will also move in random directions. If another win occurs, the process will repeat and the feature is over once there are no more winning clusters.

The Scatter is the Key, or half of a Key, to be precise. You will need to land two Scatters, or two halves to form the whole Key and open the treasure chamber, thus triggering the Treasure Chamber Free Spins feature. Gamers are rewarded with 10 freebies, while the skeleton above the reels will try to turn the Warrior and the Magician icons that appear on the reels into sticky Wilds by flipping them. If he succeeds, gamers get sticky Wilds that remain on the reels until the feature is over.

If we did our math right, the biggest possible payout players can expect in the Rabcat title is set at 1,925 times the bet. Set the wager to the max and you can win a sweet amount.

Look for the Treasure Chest and the Magician, because these two icons pay the most, offering 1,000 times the bet once you land a cluster of 25 of them. All other icons will get you 250 times the bet for the maximum cluster. Treasure Heroes’ RTP is 96.12%.

There will be players who will think that the 2020 release is a pretty complicated game since it will take you a while before you understand how everything functions around here. After a couple of spins, it will get easier, and more interesting, trust us.

The Moving Wall feature can be really helpful, but can also result in plenty of non-winning spins. We think that it is good that Moving Wall is not active during free spins, and we love the fact that gamers can get plenty of sticky Wilds while playing freebies. All in all, not a bad video slot from Rabcat.