The original Twin Spin slot came out in 2013, and it had a lot of success thanks to the unique mechanics it used. They turned it into a Cluster Pays title for the Deluxe version in 2017, and now we’re looking at Twin Spin Megaways, so one more change of format in what has become a huge success for NetEnt over the years.

It’s not much of a theme if we’re being honest, just the same classic symbols that everyone else relies on, but luckily there are other things to make it interesting. Those symbols include Diamonds, Lucky 7s, Bar, Bell, Cherries, and the six top Royals (9 to A). Wild and Scatter logos join them, as its feature triggers.

NetEnt, a developer of online slot machines which has been around since the 90s, is one of the top names of the industry right now. It’s especially true for the slot machine category, as they have some of the best designed games around. The Megaways isn’t a system that they invented, but that doesn’t stop them from implementing it in some of their most popular games. This also happened in Gonzo’s Quest Megaways, another classic which was upgraded. 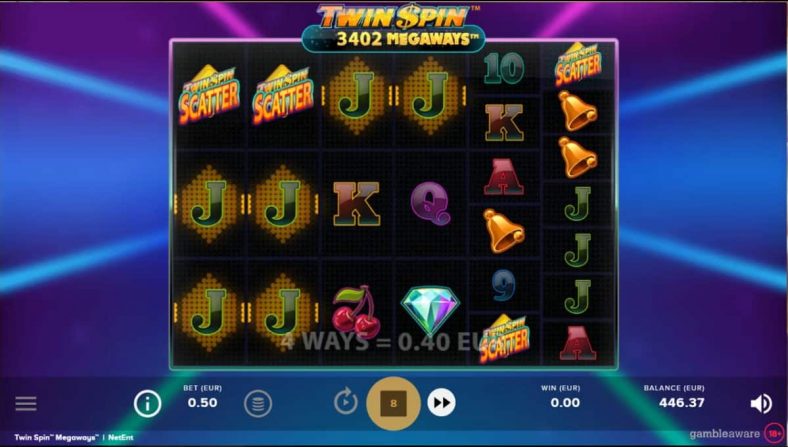 A very long list of betting options opens up when you click on the Bet button (stacked coins). The values there range from $0.10 to $100.

The game area of Twin Spin Megaways features 6 reels, which have 2-7 symbols each, randomly chosen for each one. As such, there is a lot of variation in the number of potential combinations each round, with the best case scenario delivering 117,649 Megaways (7 symbols landing on all the reels). Combinations will be formed with 3+ symbols of the same type, landing left to right on consecutive reels.

An Avalanche is a feature which triggers for every winning round you get. It’s sometimes called Cascading Reels, Exploding Reels, etc, depending on the game and developer that you’re seeing it in, but it’s by no means unusual these days.

It takes the winning symbols away, and leaves room for a new set of regular symbols. Should new wins form, the Avalanches keep triggering and can bring even more prizes.

Another big feature is called Twin Reels, and it’s the one that made this series famous. Each round, there are 2+ adjacent reels selected, and they will show matching symbols in similar positions (also, the same number of symbols). This gets you better chances to form wins that round.

There are wilds as well, symbols which can land during all types of spins, but with 2x/3x multipliers added for the free rounds.

Finally, if you can get five or more Twin Spin Scatter symbols in view, the game will trigger 15+ free spins for you. The Twin Reels are guaranteed to have 7 symbols in this mode, and wilds have 2x or 3x multipliers to apply.

For a game with Megaways, having big top prizes is pretty much a given, but there can be a significant difference from one slot to the next. Twin Spin Megaways is one of the better games in that regard, with top prizes of up to 38,000x the stake possible.

Volatility is Medium-High, that was to be expected, but RTP manages to reach a healthy 96.04% anyway.

Twin Spin Megaways is a successful third title in this series, a hugely popular slot machine getting a proper sequel in this one. It offers big top prizes, the same Twin Reels that made the previous slots popular, and a Megaways engine that has proven itself over the last couple of years.