Thanks to the release of Vampire Senpai, many of us just find out that the legends of China have vampire-like creatures, which take away the life force of people. It’s that kind of vampire that we’re getting from Vampire Senpai, and it makes for a fun story in a modern slot machine, the likes of which Quickspin has become known for.

In a fairly large game area, with 5×5 reels, and surrounded by a temple like construction, we find as symbols the Vampire Wild, a Bonus Bell, along with three medium characters that show us a Red Girl, Green Woman and Purple Man. The last four symbols from the paytable are those with the Royals, J to A. 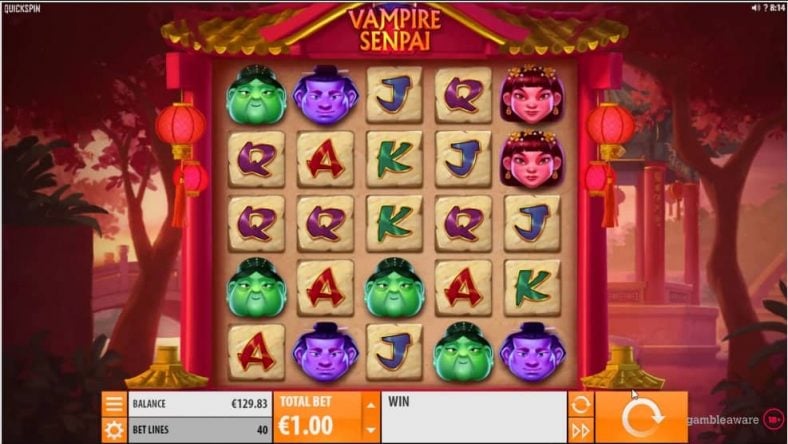 The company behind the release of Vampire Senpai is called Quickspin. They currently have about 70 other slot machines, and they’re available at hundreds of casinos, from more than 30 countries. The company is recognized for the quality of their games, and they tend to release about one new slot every month.

The Total Bet section opens up a small menu when clicked, and the range of the bets that you can select from there goes from $0.10 to $50.

In exchange for your wager, whatever the value which has been selected, you get 40 active lines on 5×5 reels, which is a bit too spread out. The combinations will form in the usual way, via 3+ symbols of the same type, landing left to right on an active line.

Vampire Wilds are among the more interesting symbols and features that Quickspin has implemented for this game. They show up and act as substitutes, but at the same time they also trigger a Turning Wild feature.

Turning Wild has the Vampire Wild transforming any character/medium symbols that are next to it. These become Turned Wilds, so there are blue wild versions of the original symbols.

Another feature worth mentioning, and a random one that can trigger at any point, is Talisman Mystery Wilds. When triggered, it adds 3 to 9 Talisman Wilds, on the first four reels. This is the only way to get this type of wild.

Reanimated Free Spins are available when the Bonus Bell symbols land scattered, and 3, 4 or 5 times. At that point, you get 7, 9 or 12 free games out of it, along with some extras. For example, the Vampire Wild is going to be available on the reels for as long as the free spins are running, but it will move in random locations each time. You also get the Talisman Wilds to lock in their positions, if they show up through the Talisman Mystery feature. The only way to get more free spins, is by getting wilds to appear, as each one adds an additional round to the total.

In a game whose volatility is described as a Medium, we find top payouts of up to 8,894x the stake, which is quite a bit more than I’d expect such a slot machine to offer. RTP also manages to be adequate, and Quickspin announced that they expect it to come in at 96.19%.

Vampire Senpai looks great on most counts, and I appreciated most things about it, from the list of features, to its combination of medium volatility/high potential payouts, or the excellent design. About the only thing that I might’ve wanted different, is a higher number of active lines for that big game area.