Wild Blood 2 is a sequel for another vampire themed slot machine which is offered by Play n GO. With better graphics and features, it is a good alternative, and a fun slot for anyone that likes the genre.

Expect the prettiest vampires around on the reels of this game, so you’re not exactly looking at monsters. Vampires, blood vials, three women (Rebecca, Margaret and Laura), daggers, skulls and Royals will be the symbols you get to play with. 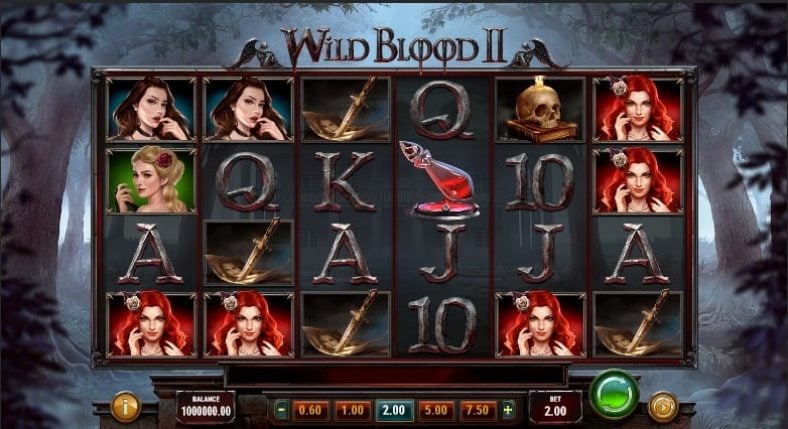 Play n Go is the name of the developer that’s designed this slot machine, along with its predecessor. Known for offering slots which usually pay 5,000x or more in a best case scenario, it typically includes high volatility in them, but it’s not the case here.

$0.20 is all it takes, to start spinning the reels in Wild Blood 2. On the other hand, you’re not limited to just low value bets, and at its highest a single round’s wagers can reach $100.

In exchange for your investment, the game gives you 6×4 reels which have 4096 ways to win, with a lot of different winning combinations potentially forming there. You just need matching symbols on 3+ reels, and left to right, to get a win. It’s that easy.

Vampire Wilds are among those that will help out as you play the slot, though they will do so only as substitutes. Wilds will not be contributors to your wins directly, as they don’t appear on all reels (only middle four columns get them in regular size, while the last one gets them stacked). However, they are easy to include in other types of wins, since a slot with ways to win doesn’t require them landing in fixed positions.

The stacked Vampire wild, when appearing on reel 6, will give you access to a Vampire Bat Re-Spin. The Vampire Wild is moved to reel 1, and a re-spin follows with it locked. You can’t get additional re-spins in this feature though.

Scatters will be present as well, taking the form of Blood Vials. Landing 3 to 6 on the reels, will trigger 10 to 25 free spins. It’s the type of bonus where you decide what kind of experience you want, by picking one of the three main characters.

The volatility is different, with frequent but smaller wins expected from Laura (wilds spread either down or up, Laura transformed into wilds during re-spins), while fewer wins but bigger ones will be offered by Rebecca (2x and 3x multipliers applied by wilds, combined to up to 81x, while Rebecca is a wild for re-spins).

Margaret is the option that’s sitting somewhere between the two extremes, coming with up to 5x multipliers, extra free spins, and her as the extra wild during re-spins.

As with a lot of other slots released by Play n GO, we find here a high return, of up to 5,000x the stake. The game pays up to $500,000 then, and best of all is that it manages this without being as highly volatile as others from this company.

In fact, it’s advertised as a medium volatility option, a 5 on a scale which goes up to 10. RTP being at 96.18%, you can rest assured that the game is fair enough to you.

Wild Blood 2 looks like an excellent alternative to other popular vampire themed slots available right now, and with modern graphics and big payouts, it manages to keep the volatility at a Medium that should agree with a lot of player’s preferences.