Wild Frames was Play ‘n GO final release in 2019, described as “a stylish slot based on the classic casino chic of Vegas”. As the name indicates, there’s a strong focus on Wild action.

Frames created by Wilds have the potential to increase wins while multiple consecutive winning combos charge the meter which in turn activates lucrative charge features. The mechanism may appear complicated at first but all one has to do is set reels in motion and allow substitutes to fill the screen. Ready to go Wild? 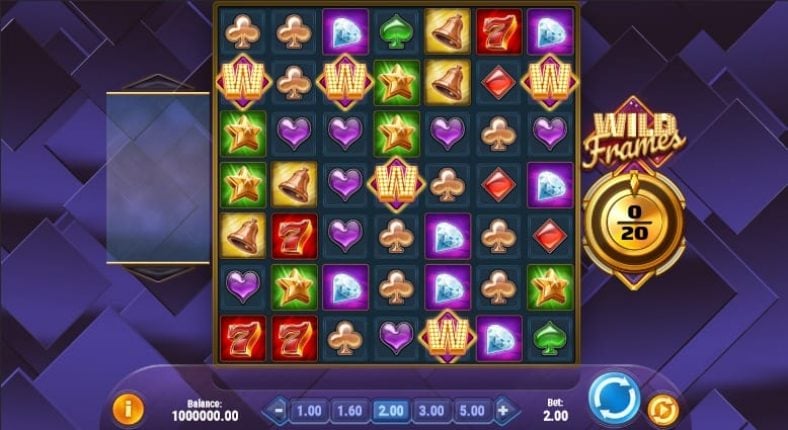 Play ‘n GO has been around since 2005 and since then accumulated a respectable number of industry awards. Players are continuously impressed with creative gameplay and high quality of visuals and animations.

The developer’s slots portfolio is quite diverse in terms of themes as well as type and number of special features, thus making sure every fan can find something to their taste.

The game uses a 7×7 grid and pays for clusters of at least five identical symbols connecting either vertically or horizontally. Reels will spin for a minimum of €0.20 and a maximum of €100. Players can make them move automatically up to 100 times and use certain criteria (a win, balance increase/decrease) to interrupt Autoplay before the selected number of spins plays out.

The design and usage of timeless symbols like 7’s and golden bells, glittering diamonds and shining stars reminds us of classic slot machines. All winning symbols resulting from the same spin are recoded on a display positioned to the left of the grid and fuel the meter on the right with the ultimate goal of triggering the game’s main feature.

Clusters of 5+ matching symbols disappear after paying out and new icons cascade down to replace them, thus creating the possibility of multiple wins from the same spin. Glitzy Wild W is a substitute icon which can help create winning combos. The outcome of a non-winning spin may be changed by a random addition of 4-6 Wilds.

Every time a Wild lands on the reels, it will create a frame around that particular grid position. The frame remains fixed until all cascades are completed. If the substitute cascades from one position to another, it creates a frame on the new position as well. If it cascades into an existing frame, a multiplier is applied to that frame. You’ll want to see as many Wilds as possible land in the same frame and boost the respective multiplier to up to x9.

The number of symbols within wining clusters charge the meter and every twenty charges unlock a special feature. Every Wild that forms more than one cluster is counted for each cluster it’s part of, meaning a single symbol can charge the meter multiple times.

Here is what you’ll get: 20 charges will transform all high-paying symbols into one and the same high-value icon, 40 charges will randomly add 3-6 Wilds to the grid, and 60 charges will remove all low-paying suit symbols and initiate a cascade. Those lucky enough to achieve 80 charges will trigger the Wild Frames feature.

Every 10 charges beyond 80 add two extra frames to the grid – one in a new position and the other placed over an existing frame and thus enlarging its multiplier. Triggering Wild Frames causes all symbols below frames to transform into Wild icons and, once cascading action stops, multipliers are applied to wins created by symbols that are within those frames.

Wild Frames is a highly volatile slot with a theoretical return of 96.5%. With all the Wild action that goes one, players stand to win a maximum of 7,000x their total bet.

Though the mechanism itself isn’t fully innovative, Wild Frames slot allows Wild substitutes to contribute in ways we’ve not seen before. You may get dizzy while trying to simultaneously monitor what’s happening on the grid and checking whether the spin has resulted in the required number of winning symbols, but that’s what makes the game exciting.

High volatility means that many of your investments won’t pay off but, providing your money lasts until the main feature activates, a single spin could more than make up for all previous losses.