At first glance, you’ll find nothing special about this forest. It’s full of animals going about their business, just the same as everywhere else! But if you pay close attention, you may notice a few potions laying around! And if you follow their trail, you will come across a tome left behind by a sorcerer. Why has it been left behind, nobody knows. But without its master, its magic randomly appears, creating very lucrative changes!

We really like the visuals. The background is a heavily forested area, full of mushrooms, trees and shrubs as far as the eye can see! Players will also notice fireflies zooming about, and the occasional ray of light poking through the branches. It makes for a great view, but not so eye-catching to distract you from the reels, and what you can find there!

Boldly, this slot decided to go for only one special feature. Wild Tomes appear randomly, and have the ability to swap symbols into Wilds. A full reel transformation even leads to the jackpot!

Wild Tome of the Woods 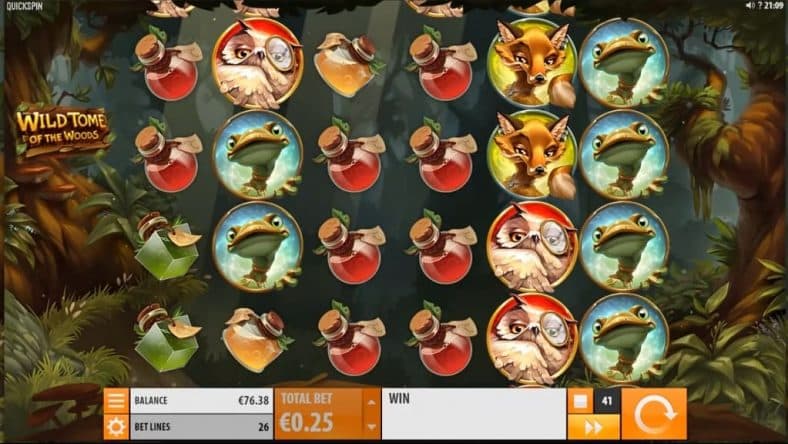 Quickspin has always known how to attract attention. The studio was founded in 2012, and its first games were hits with the crowd! No surprise, considering the company was founded by experienced industry veterans who knew exactly what to do. Their talent and enthusiasm has led to many great releases, and the attention of bigger developers. In 2016, Quickspin has been acquired by Playtech, giving them even more resources to create fantastic slots.

Wild Tome of the Woods is played on a 6×4 board with 24 paylines, which pay left to right only. Gamblers cannot turn individual paylines on or off. Instead, they change their total stake by clicking the Total Bet button, and choosing one of the values in the drop-down menu. This allows for bets between $0.25 and $100 on each spin.

Orange and white may be Quickspin’s colours, but they don’t always pan out. Don’t get us wrong, we appreciate the developer not joining the club of grey or transparent user interfaces. But they could make minor colour adjustments depending on the background!

Upon first opening the Autoplay, you only see the number of autospins that can be played. Clicking the Advanced button, however, you’ll see that the game allows its players to set loss and single win limits. Great news if you want to bask in the glory of your victory, or stop your budget from depleting itself chasing after a win.

If you asked us to point at one thing and pick our favourite, we wouldn’t be able to do it. Separated, the various elements of this release don’t look that great. But put everything together, and you have a neat slot that’s above average in appearance. Hats off to the developers, they’ve created a proper enchanted forest for Wild Tome of the Woods.

Symbol designs don’t have playing card royals in them, so that’s immediately a plus. Instead, you will find an owl, a fox, a turtle and several different potions on the playing field. There’s also the Golden Wild and the red and gold Wild Tome.

Any Wild Tome that appears on the board will open, and reveal one of the regular icons from the paytable. Every position where that symbol appeared on the playing field will be replaced with Wilds! As the last replacement is happening, there is a chance for it to create another Wild Tome instead. And if that happens, another substitution will happen, which creates more Wilds, and the opportunity to do it again presents itself.

Thanks to this bonus, it is possible to fill the entire reel with Wilds! If you succeed in doing so, you will earn the maximum possible prize which this slot offers.

This medium-high variance game has a jackpot worth 1000x your total stake. Quickspin’s release has an RTP of 96.28%, which is above the current industry average.

How enjoyable Wild Tome of the Woods will be for you depends on how much you enjoy its gimmick. With only one special feature, it was a blast for a while, before the novelty wore off. This, combined with a low payout compared to the volatility, leaves us sceptical to recommend this slot. It’s enjoyable to play, but if you’re looking for big wins, you’re better off searching another forest.