With a design that’s looking like a lot of fun, Willy’s Hot Chillies is taking us to Mexico and giving us a taste of what that country is like. It incorporates images that people tend to associate with the region, which is why you’re seeing the desert, mountains and cactus plants in the background. You’re also seeing things which are more fun, like the hot air balloons which are shaped like sombreros.

The symbols of Willy’s Hot Chillies incorporate images with four card suit icons, a taco, a Chili sauce bottle, a Pinata and a Treasure Chest. Its feature symbol is the Red Chilli Pepper, in regular and multiplier versions. 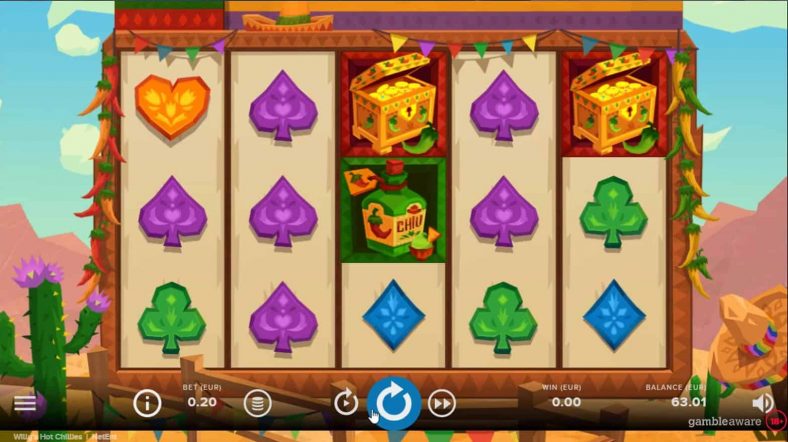 It’s NetEnt that has given us Willy’s Hot Chillies, and it’s just one of the many slot machine with gorgeous graphics from this major developer. They mostly launch slots for casual players, but they do have their share of highly volatile titles as well.

While in previous NetEnt releases you had to pick the line bet as well, here you’re just working with the total amount that you want to use as the wager. A long list of bet values is provided, with the lowest at $0.20 and the highest at $400. This would correspond to a line bet between $0.01 and $20.

The features might take a bit to learn and figure out, but the system is a standard one, with 5×3 reels and 20 paylines. You form your combinations on fixed lines, when 3 or more of the same type are arranged left to right.

The stacked Multiplier Wilds are among the game’s more interesting features. These are going to take the form of Red Chillies which have numbers next to them. The reels 2 to 5 get these wilds, and the multipliers are between 2x and 5x. If several wilds are part of the same combo, then their multipliers are added together, to find out what kind of boost that win will get. Most symbols can benefit from their presence, though the scatter symbol is an exception.

The other main feature of the game, Willy’s Hot Wheel, can be reached when you get the Mexican Man bonus symbol on the 1st reel, while at least one stacked Multiplier Wild is present and covering one of the other four reels.

When that happens, the reel which has the stacked multiplier wild is transformed into a Fire Pointer, for a number of spins. It will point towards the top of the reels, where various rewards will appear. You win whatever prizes are at the top, as long as you still have the Fire Pointer active. You can get a prize of up to 30x the stake this way, or 3 extra spins, an additional Fire Pointer reel, or even a Chillie Multiplier that boosts all prizes of the feature.

The rewards of Willy’s Hot Chillies are decent, up to 2,000x the stake being paid in a single spin, quite acceptable for a slot machine with medium volatility. You want to see a decent jackpot in a slot like this, even if it doesn’t have as high volatility as others.

RTP is also fine, at 96%, about what you’d expect in terms of long-term odds from a modern game.

Willy’s Hot Chillies is one of the many interesting slots from NetEnt’s collection, not just because of its potential to pay, but also because it incorporates certain features that are looking like fun. The Fire Pointer system is especially noteworthy, if you can get the Hot Wheel feature, but the Wild Multipliers are also good.