Remember the movie “Honey, I Shrunk the Kids”? At one point, miniature kids are wondering through tall grass in fear of various bugs and insects. Perhaps that’s what gave NetEnt the initial idea for Wings Of Riches.

With a touch of magic, the lawn was populated by fairies living next to colourful bugs and flowers, and players shrunk to their size to be able to enter this micro world. Fortunately enough, there’s no lawnmower in sight! What you will find is spreading Dandelion Wilds, Scattered Dragonflies tasked with launching free games and Multiplier Tulips boosting all Free Spin wins.

Same as all NetEnt games, Wings Of Riches slot is expertly adapted to perform just as well on small touch screens of iOS and Android devices. A few changes to the UI – the spin wheel disappearing when reels start moving and a separate submenu with all options and settings – keep the screen clear without having to dispose of any of the game’s functionalities. 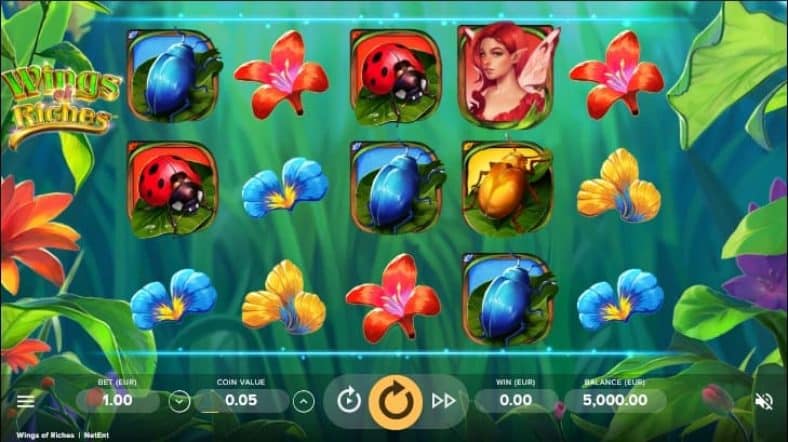 NetEnt is a name well familiar to all slots fans, no matter if they’re seasoned players or individuals that have only recently discovered the online gaming scene.  The company has been around for ages and nowadays boasts an impressive assortment of various RNG and live casino games as well as an extremely wide distribution.

NetEnt regularly delivers innovations in terms of features and makes sure each of its products meets the highest quality standards when it comes to visuals and sounds.

Wings of Riches is a 5-reel, 3-row video slot with 20 fixed paylines. Coin values range between €0.01 and €20, which means one can bet a minimum of €0.20 and a maximum of €400 per spin. The reel area is completely transparent so that symbols appear to be suspended in mid-air.

Identical ones have to appear in succession from the leftmost reel in order to pay. Beautiful elves are the most generous icons in terms of the value they can add. Bugs are the mid-paying symbols and flowers pay the least. Visuals are so nicely designed that you may feel a tad guilty next time you use a lawn mower. Soft music combined with buzzing, chirping and fluttering sounds might make one believe they’re actually playing outdoors.

Autoplay function can make the reels spin on their own for up to 1,000 times. Attached options allow players to stop Autoplay under certain circumstances – on any win or a win exceeding the specified amount, when bonus round gets triggered or when balance increases or decreases by X.

Wilds will only land on reels 2, 3 and 4 but they have the ability to spread and transform 2-4 neighbouring symbols into additional substitutes. It takes a minimum of 3 Scattered Dragonflies to win 10 free games. Additional free-play opportunities are awarded if more Scatters land during the bonus round. A pair will get you 5 extra spins and 3 award 10 spins on top of those already won.

The Multiplier symbol randomly shows up on the last reel. Each time it does, it will increase the multiplier by 1 up to a maximum of x5. Once it reaches its max value, Multiplier symbol disappears from reel 5 but the remaining spins still receive a x5 win boost. As long as you’re playing for free, Wilds are guaranteed to show up on every spin (at random positions) and sub for all other icons except for Scatter and Multiplier symbols.

Wings Of Riches slot has an RTP of 96.63% and low to medium volatility. As all low-variance games, it will pay relatively frequently but can’t win you massive amounts. The biggest payout in a single spin is 400x the stake.

Having learned that an online slot is developed by NetEnt, you’ll know you’re in for a visual treat even before you launch the game. Animations are exquisite as demonstrated by Wild Dandelions which allow their florets to be blown away and spread the seeds on nearby positions to turn other symbols Wild.

Owing to an exceptionally wide bet range, Wings Of Riches is bound to attract both low and high-rollers. However, some may be disappointed with relatively slow gameplay and a modest win potential.