It’s a large game area, and the design of it captures the battle between good and evil very well, as it is mentioned in the legends of the Nords. Mythology has been a big source of inspiration for this game, and you see the Valkyries as main symbols on the top set of reels, while legendary beasts and villains are on the bottom one. Additional symbols that appear will take the form of runes mostly. 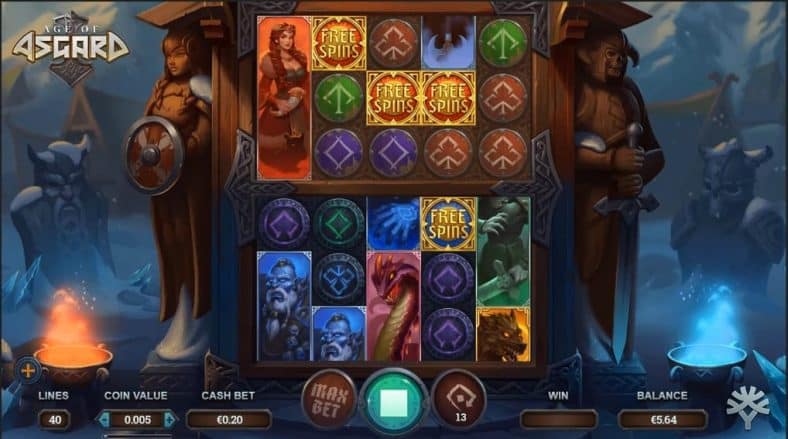 Based in Sweden, and even relying on Nordic mythology with their name selection, Yggdrasil Gaming is a developer that seems to get what it takes to make an attractive slot machine these days. They offer a lot of excellent slots in their collection, though the top payouts aren’t always as exciting. Graphics and features seem to be their strengths though, and I for one often found myself enjoying their new releases.

It’s an unusual game design, with two sets of 5 reels placed on top of each other. This Double Reel game area will feature unique symbols for each of the sets of reels, and at times they can be combined, giving you additional lines then as well (up to 50 lines possible in this game). Of note are also the stacked symbols of high value, with heroes shown on the top set and monsters on the bottom one.

Two types of wilds are introduced in the game, one for each of the two areas. The top area gets a Golden Warrior, the bottom one has a Golden Beast, and they have a Wild logo of their own added to their image. These are stacked wilds. Nudging occurs when they land, if they don’t cover the full reel initially. Get them to cover their reel, and they first lock, then trigger a respin.

Should reels opposite each other get full wilds at the same time, a Clash will occur, which results in random regular-sized wilds being added on the reels. High pay symbols get turned into wilds, if such a symbol lands on them.

10 free spins can be triggered when 3 scatter symbols appear on either the bottom set or the top set of reels. The grids merge and give you one large area to play on. Get the scatters to trigger on both sides at the same time, in order to reach the Ragnarok Spins instead (only high value symbols, wilds nudge always into place).

The biggest reward that one can hope to take away from Age of Asgard, is worth 2,444x the round’s stake, the cap being placed at $488,860 with this one. It’s a good enough jackpot, especially since the volatility is a 6 out of 10, so it’s only medium. It’s not extremely risky to play, but it will not be a walk in the park either.

RTP wise, with its 96.20%, the game will do just fine in the long run. Players tend to get back a fair amount from it, but it doesn’t mean that it will be true for you as well.

Age of Asgard has great graphics, a very fun and well-designed mix of features, and overall it’s the best online slot game made in 2019.