Ancient Egypt was the most significant civilization at the time with artefacts so brilliant and grandiose that, even deep into the 21st century, we still admire them. Beat the Beast – Mighty Sphinx video slot is based around Ancient Egypt and presents an endless desert in front of which lay the reels.

The symbols that populate these reels, such as two types of Sphinx, are derived from the theme. The less paying symbols are card values that are nicely crafted and merged into the theme. The mysterious soundtrack fits perfectly and contributes to the overall peculiar atmosphere. 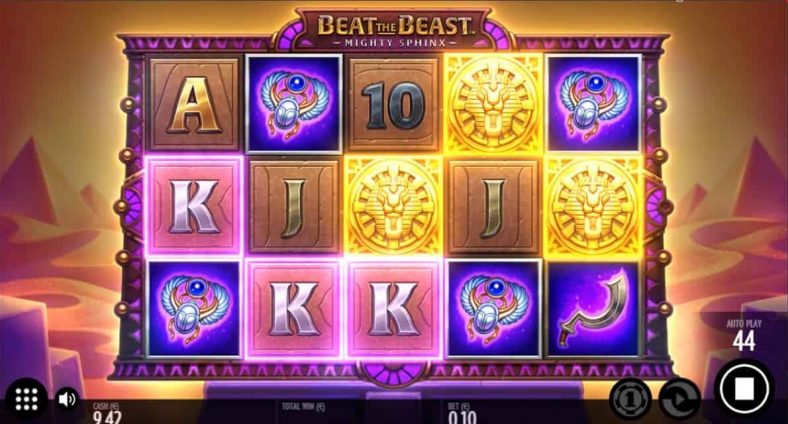 When a couple of guys gathered in a small Stockholm studio in 2012, nobody except them was expecting anything special. However, what was not so long ago a group of ambitious programmers trying to do their thing is now a company whose name knows everyone in the gaming industry.

Thunderkick is famous for their themed slot machines inspired by mythology and old civilizations. Most of their games keep the standard 5×3 layout but have very nonstandard and original gameplay solutions. Thunderkick holds the UK and Malta gaming license, which is a good ground for their anticipated growth in the online gambling world.

Beat the Beast – Mighty Sphinx video slot is played on 5 reels with 3 rows wit 9 fixed paylines. To make a winning combination, you need at least three matching symbols on adjacent reels left to right, starting with the leftmost reels.

A click on the Bet button gives you 14 different bet values to pick with an extensive betting range going from $0.10 up to $100. Such a range ensures both savers and high-rollers can enjoy the game. Using the Auto Play option, you can put the game on autopilot of 5 to 5,000 auto-spins. The high-paying symbols include different golden sphinxes, Ankh cross, Khopesh sword and Scarab.

You will be awarded even with two of a kind combinations, but with only a fragment of your bet. So, for real wins, you will have to wait for four matching symbols to come. The Sphinx Emblem is the Scatter symbol that introduces the bonus features but has its value.

Three or more Sphinx Emblems anywhere on the reels during the base game will automatically trigger the Bonus game that includes 10 free spins.

If the Bonus Game is retriggered, a new symbol will be introduced. It is the Wild symbol that enters the game instead of one of the mid-paying symbols and can substitute any other symbol and help create winning combinations. The Wild is an exclusive feature of the Bonus Game, and you will not see it in the base game.

The most you can make in a single spin is defined by the game rules and cannot exceed 4,444x your bet. Even with such a limitation, Beat the Beast – Mighty Sphinx belongs to the video slots with high maximum payouts.

The average payout presented in the RTP of a little bit more than 96% can be considered an industry standard. The highest awarding symbol is the Golden Sphinx that pays 250x bet for a 5 of a kind combination.

With many Egyptian-themed slots around, one can think another one would have little to offer. However, Thunderkick has shown with Beat the Beast – Mighty Sphinx that a good craftsman can make even the old items shining.

The graphics are not a knockout but, combined with the soundtrack, fits perfectly to any screen and can be played on all the devices. The game is based on Scatter symbols that have multiple roles, with the main one being the activation of the Bonus Game.

Unlike some other games, the Free Spins can be retriggered during the Bonus Game which gives you a chance to make some huge winnings. Considering the wide bet range that goes up to $100, the maximum payout of 4,444x seems very attractive.