Gods of Rock, from Thunderkick, comes with a special take on the old rock music and god themed designs that we’ve been seeing plenty of times in slot machines from all developers. They’ve mixed the two, and brought the ancient gods of several civilizations to our present times. The action takes place at a rock concert, with huge crowds of people in front of the stage where the gods perform.

On the reels, some of the symbols shown will still feature Royals, the usual half a dozen that go 9 to A. The others give us images of gods, including Thor, Athena, Medusa, Anubis, and the Devil himself.

One of the popular slot machine developers in the last couple of years, Thunderkick tends to release about one new game each month. They don’t have as many titles as others, but they make up for it with a higher quality, both design and feature wise. A couple of other games of theirs that I’d like to mention, include both Pink Elephants slots, along with Divine Lotus, and Midas Golden Touch. 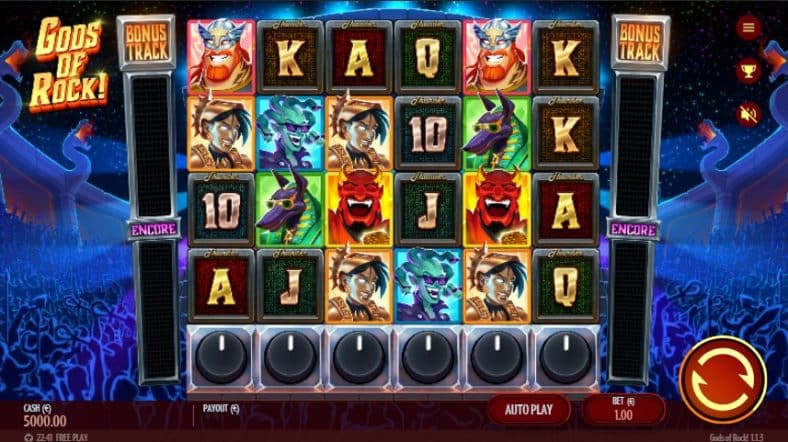 A regular betting system is included with Gods of Rock, starting you off from a $0.10 minimum, and potentially going as high as $100.

In exchange, you’re looking at 6×4 reels, where you will find only 466 connecting lines, which will pay both ways. Winning requires having matching symbols that are connected diagonally or horizontally, across 3 or more reels.

After each win, you will find that the winning symbols explode. They drop from the game area, and they get replaced with new ones, which can then lead to even more wins and explosions.

One of the major features that they’ve implemented in Gods of Rock, is called a Charged Wild. It’s used as a substitute, which will also give the reel multiplier (shown at the bottom of the reel) a boost by 1x. Following this, the wild explodes, along with the symbols that are next to it.

As for the multiplier that was boosted by the Charged Wild, it will only stay on for the current round. It resets once you stop getting exploding symbols. You can have these go up on multiple reels in a single spin, and in that case they will multiply each other to give you big wins.

Accessing the game’s major features requires that you get as many exploding symbols as possible, all in a single round. These are collected in special meters found next to the reels, on both sides. The first 30 symbols will give you access to Wild Encore, while getting 55 will get you 8 free spins.

Wild Encore is the name of a feature that adds up to 3 Charged Wilds somewhere on the game area.

During the free games, you will get several advantages. One is that the reel multiplier only goes up, it never resets. The other is the fact that the meter does the same, so you keep accumulating symbols, and you can get an extra 3 rounds when you fill it.

I’m not exactly happy with the connected pay ways system, but I love the potential rewards. The use of the reel multipliers contributes a lot to the top jackpot, worth 20,000x the stake. As expected, the volatility is high, but at least it has an OK RTP, at 96.05%.

Gods of Rock looks like another fun slot machine from Thunderkick, the way most of their content is. I loved the reel multipliers, and their awesome potential, particularly once you get to the free spins. It’s not going to be easy getting there though, this is still a highly volatile release.