Quetzalcoatl’s Trial is the fourth slot machine from Thunderkick to be included in a series called Beat the Beast. They’ve went for an Aztec themed design, where the main character is a serpent god called Quetzalcoatl.

You see it in one of the game’s symbols as an emblem (wild/scatter), in another that has it in the form of a small golden statue, while other icons range from crowns, to an ax, cups and Royals. It’s a good design, as expected, with pyramids and surrounding jungle shown in the background. The reels are made out of green stone, with Aztec style decorations around them.

Thunderkick is not the biggest developer around, but it’s been fairly successful and appreciated over the years. The series we’re looking at now, Beat The Beast, was especially interesting for players. Other games from this series took us to different countries and regions (Mighty Sphinx, Kraken’s Lair and Cerberus Inferno). 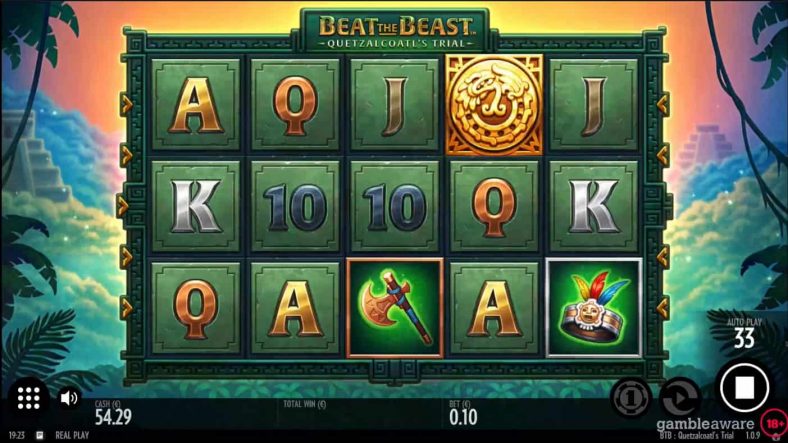 As little as $0.10 is required to spin the reels in Quetzalcoatl’s Trial, and in exchange you get the 9 lines active. There is a much higher ceiling for the betting range though, as the game allows you to spend up to $100 per spin.

In a standard game area, with 5 reels to play on, you only get 9 active lines, so forming those winning combinations isn’t as easy as in other slots. A combo will form and pay when you get 3 or more symbols of the same type, on an active line, starting from the leftmost position.

One of the game’s more special symbols, the wild is actually the scatter as well. It features the image of a golden snake emblem on it. You may use it as a substitute quite often, but the aim is to get at least three on the reels at the same time. This would get you a prize of up to 200x the stake, plus the bonus feature.

Once triggered, the feature will start off with 10 free spins, giving you a chance to advance and level up, by collecting special wild symbols (green W logos) which show up along the way. In total, there are 5 levels that you can advance through. To get to another level, you need 5 wilds collected in a meter. At each level, one of the medium symbols will be upgraded, until eventually you’re left only with the statue of Quetzalcoatl.

Additional free spins are added as well, with each new level, but you can also retrigger them in the usual way, with 3+ scatters getting you another 10 rounds.

Quetzalcoatl’s Trial has excellent potential, though it doesn’t quite reach the kind of jackpots that some of the new slots are promising. Still, 5,555x the stake is a very good top payout for a slot machine with high volatility, such as this one. The RTP, which is calculated at 96.16%, is another thing that gives us confidence, that this slot is worth checking out.

Beat The Beast: Quetzalcoatl’s Trial looks good, has a mix of features which help make the action fun, can pay reasonably well, but it also has a volatility level that might not work for everyone. Overall, I found it to be a good addition to this series, and one more fun release from Thunderkick, adding to their reputation.