The impression we’re getting from Cyberslot Megaclusters, is that it’s a slot machine which takes us to space. Based on the symbols that the game uses, I’d say that’s the case, but it doesn’t go further than that. There is no well crafted theme here, just an abstract image for the background, and a bunch of planets and asteroids showing up in its symbols, each one in a different color. There are pink, red, blue, green, orange, yellow and teal versions acting as regular symbols, while several types of W logos are used as wilds.

It’s not a great design, but that’s never been a forte for Big Time Gaming, so I wasn’t expecting it.

Big Time Gaming has created for itself a reputation as an innovator, and the company has made a lot of money in recent years thanks to it. Not only were their own Megaways slots among the world’s most popular after their release, but they also licensed out the engine, and now there are dozens of new titles using it. They take their time with new games, but they are almost always going to innovate in some way, and they’re also going to be highly volatile, so they cater to a more specialized market. 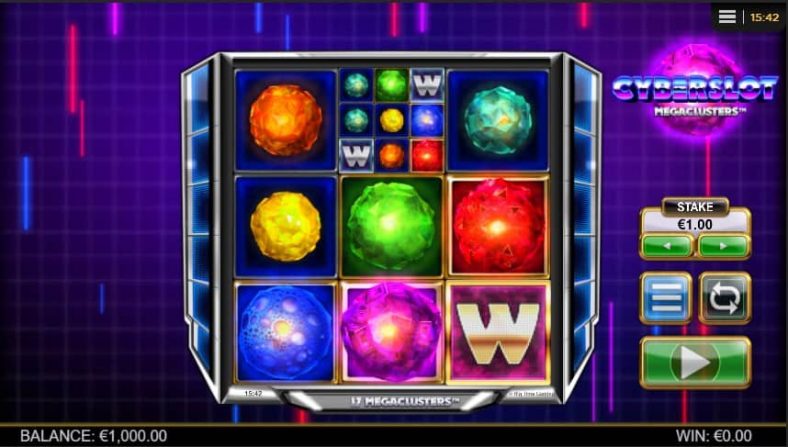 One of the very unusual things about Cyberslot Megaclusters, is that it starts off with 3 reels of 3 symbols each, though one of them will be split into 9 smaller symbols. As the name suggests, it uses clusters of symbols to get you paid. A minimum of 5 are needed for a win, though for best results you want 25+.

The MegaClusters mechanic allows the game area to expand, following the formation of winning clusters. Initially, you have 8 regular symbols and 1 which is split into 9 small ones. Form clusters with those, and you trigger the expansion of the winning positions. The former symbols get removed, and new ones land in the empty locations. You are now getting 9 smaller symbols for each large winning symbol removed. Up to 81 symbols can be had in view at the same time, once all positions have expanded, even though only 3×3 reels are available initially.

This mechanic is taken to the next level during free spins. You start with 9×9 symbols there, and each winning one is split into 4 additional symbols.

The reactions, which remove winning symbols and bring others in, will keep going for as long as clusters are forming.

There is a Roaming Wild on the reels at all times, moving around and contributing to new combinations. It comes in a Rainbow version during free spins. There are also regular wilds, which may land and help as substitutes.

Multipliers are applied by Roaming Wilds, if they contribute to wins several times within the same spin, but following multiple reactions. Up to 15x multipliers can be reached.

As for the free spins, you get 6 of them once you go through 12 reactions during regular spins. You keep using the same Roaming Wild Multiplier. As mentioned above, 9×9 reels are used to start with, and each winning symbol is transformed into 4 smaller ones, following the reaction.

The payouts are going to have great potential, and a 30,000x the stake reward is something that will get a lot of players excited. Risky to play, meaning highly volatile, it still has a proper RTP, at 96.36%.

Cyberslot Megaclusters is an impressive new title from BTG, a slot machine which does the new Megaclusters mechanic justice. It might just have a chance against other Megaways slots.