Star Clusters Megapays doesn’t actually get much of a theme, being a simple slot machine overall, which relies on colored gems for most of its symbols. It’s not quite the usual large game area that most Big Time Gaming slots tend to offer, but it can turn into one, starting from an initial 4×4 reels.

Its symbols will show off gemstones of different shapes that are colored in purple, red, blue, green, orange, yellow, and teal. Star-shaped symbols are used as its wilds, while Royals may only appear for certain features.

Big Time Gaming, or BTG as it’s also known, is a major developer, but one that has reached this status only in the last few years. It’s thanks to the Megaways engine, that they achieved this, though they have tried to invent all sorts of other mechanics since then, none as successful as that one though. 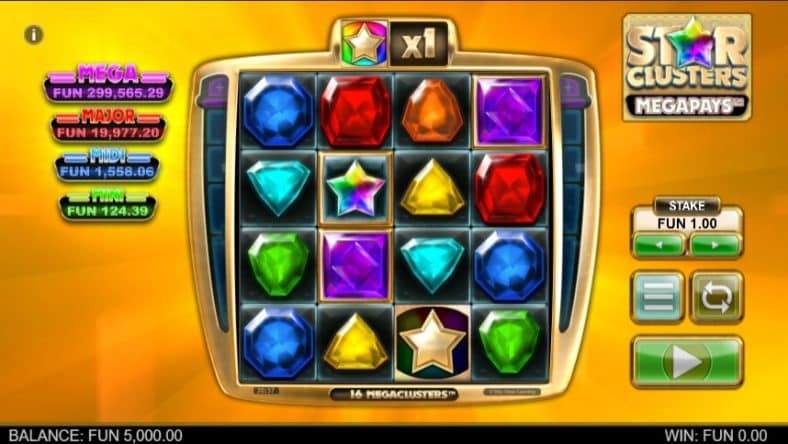 You’re going to have to spend a minimum of $0.20 for the next spin of Star Clusters Megapays, but the wagers go quite a bit higher from there, potentially up to $20.

It’s the setup that is most interesting here, since you’re getting only 4×4 reels and a Cluster Pays system (5+ matching symbols need to be connected, vertically or horizontally). The combination between the two is far from regular, but the game area can expand through them. It’s the Megaclusters engine that does it, allowing winning symbols to split into multiple positions, giving the game area a boost in the process.

Besides the fact that winning symbols split into 4 others, there is also the fact that reactions will trigger as well. The winning positions are replaced with new symbols, so that you get an additional chance to form a new cluster.

Megapays is the name of a randomly triggered bonus game, which will potentially bring you one of the slot’s progressive jackpots. It’s going to pick a Royal symbol first, from Nine to Ace, to be the Megapays icon. It will then trigger a respin, and with 4+ of those special symbols appearing that round, you can get a jackpot out of this feature (Mega, Major, Midi, or Mini Jackpot).

There will be Star Wilds that appear in the game, and they’re to be used as substitutes in the formation of new clusters. A Golden variant of the wild is also possible, but you get at most two of these Golden Star Wilds to appear. The difference is that the Golden one has an initial multiplier of 1x, and it will go up by 1x after each cluster that it contributes to.

As for the free spins, those you trigger through 5+ reactions which occur within a single paid spin. You start it with 2+ free spins, depending on how many more reactions you had beyond the minimum number. You get to use the Golden Wild Multiplier of the triggering spin as well. To get an extra 2 spins, you need to increase the multiplier of the Golden Wild to 10x, then 20x, etc.

Even though the 96.27% RTP of Star Clusters Megapays is designed to include the progressive jackpots as well, I think you’re going to be impressed with the value of its regular prizes. Up to 27,050x the stake is apparently possible, for the top jackpot. Naturally, you can expect the volatility of this slot to be High.

Its progressive jackpots are four in total, and the best one is the Mega Jackpot (initial seed value is $300,000 when it resets). The three others are Major, Midi, and the Mini.

Star Clusters Megapays is an interesting game, and a big part of that comes from the features it offers. The Megapays jackpots are also big points in its favor, as is the fixed top prize that the slot is capable of paying.