Dia Del Mariachi Megaways is proposing a type of theme that’s looking familiar, as we’ve definitely seen other mariachi and music themed slot machines in the past, including some with a Mexican influence. The theme’s angle is more towards the Day of the Mariachi, and so most of the symbols being used will fit it.

You are going to play with six low value symbols, the ones with 9-A Royals, followed by premium symbols showing music instruments. Those would be the symbols with Maracas, Trumpets, Violins, and Guitars.

Dia Del Mariachi Megaways was designed by All41 Studios, but you will often see it marketed as a Microgaming release, due to the partnership between the two companies. It made the release of this slot possible, and it’s been the driving force behind a number of other excellent titles in recent years. 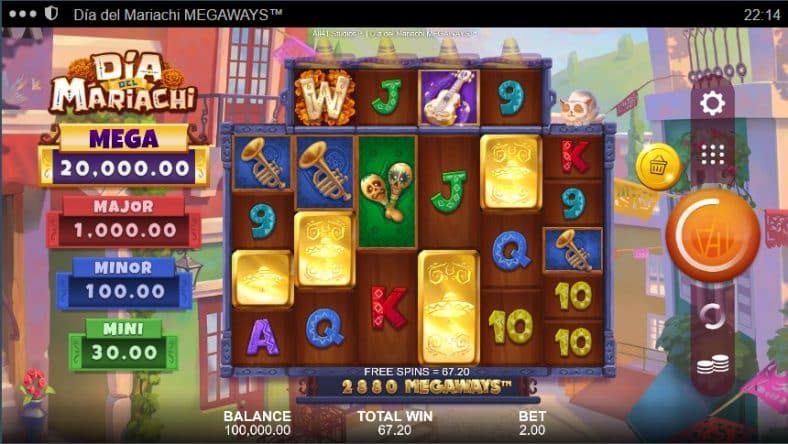 The game lets you select the total bet, covering every possible way to win. $0.20 will be the minimum amount available, while $20 is the maximum one.

Dia Del Mariachi Megaways proposes a setup that is very common for modern high volatility slots. Using 6 reels, with 2 to 7 symbols on each one, this slot could offer up to 117,649 ways to win. There is an additional set of four symbols which are placed at the top of reels 2-5, horizontally. They are included in the ways to win calculation as well.

The initial formation of winning combination is just the beginning. Rolling Reels are going to follow next, as they trigger after every single win. You will find that the winning symbols are taken off the reels, and then they will be replaced with new ones. This can bring you new wins, and even more Rolling Reels triggers, until no new combinations form.

As I mentioned before, an additional horizontal reel is at the top. It can include regular symbols, but it is also the place where you will get the wilds to appear. These are to be used as substitutes, but only for the regular symbols.

A variety of special symbols can also appear on the extra reel:

To activate the special symbols, you need a Sombrero Spin. Sombreros can appear on top of the horizontal reel’s positions, highlighting them. It needs to show up on top of a special symbol, in order to give you access to its modifier.

Getting 4 to 6 scatters on the reels will result in 10 to 14 free games being triggered (retriggered with another 4 scatters, will get you 10 more spins). All symbols are highlighted on the horizontal reel, so it’s easier to get the special symbols to do their magic when they appear.

With the Mega Jackpot alone paying 10,000x the stake, the potential of a single spin of Dia Del Mariachi Megaways could go as high as 12,000x. It’s not a bad payout, especially if the slot’s RTP is at 96.42%, the higher option included in the range. Otherwise, expect this to be a high volatility slot machine.

You will easily find other Megaways slot machines that can pay much better than Dia Del Mariachi Megaways does, even with similar volatility and RTP, but there aren’t many that offer the same high quality graphics and unique features.