The Oriental connection of Divine Lotus is unmistakable, yet at the same time we find that Thunderkick didn’t use the usual Chinese style graphics. A lot of these slots will have a mix of gold and red in their design which will overpower everything else, but here we get an actual unique design.

It revolves around some of the usual symbols, so we still see lotus flowers, dragons, dragon babies and Royals, but they’re much better designed. Add the gorgeous fantasy-style background graphics, showing floating islands in the sky, and the result is an excellent design. 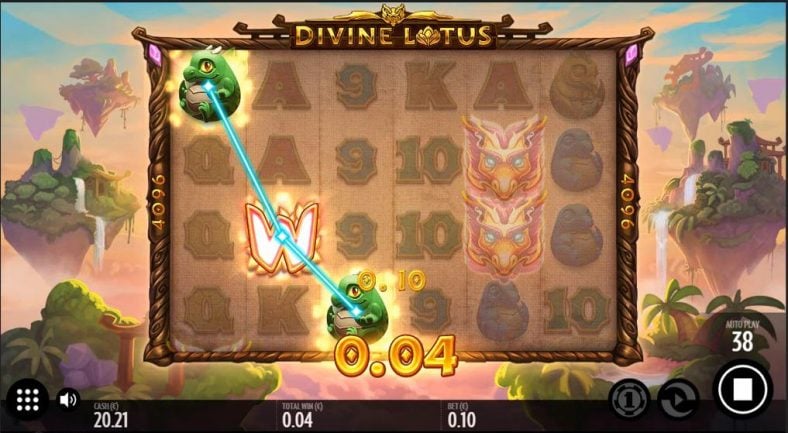 Divine Lotus comes from Thunderkick, a medium-sized developer which has impressed over the last couple of years. They’re one of the companies launching slot machines with great graphics and features, and sometimes with very good rewards as well, which is the case with this game actually. Games like Riders of the Storm or Pink Elephants are among those that I’d recommend, from their collection.

To benefit from the game’s entire play area, all you need is for a wager of $0.10 to $100 to be selected. It’s a list of bet values that you’re given, so you just pick the right one, without playing with coins and denominations.

What you have here, is a slot with 6×4 reels, where there are 4096 ways to win active. Winning combinations are then formed by landing 3+ symbols, left to right on just as many reels.

One of the simpler features which are introduced, the W Logo is going to be your wild symbol. You can have it form combinations together with regular symbols, just by appearing anywhere on a reel. It will not be possible for it to replace any feature symbols though.

Mystery Lotus symbols will appear on the reels, and once the spin is over, will all transform into a single regular symbol of high value. The symbol is chosen at random, and what is great about this feature is that it provides you with multiple icons which are typically difficult to get.

Reaching the free spins requires that you land Lotus scatters, at least three times in view. You have 2 rounds initially, and one extra round for each triggering scatter. This mode will add a Lotus Meter next to the reels, where you collect the lotus symbols when they appear. Get the meter filled, and the game will remove one of the symbols, placing Mystery Lotus symbols in its place. You also get one additional free spin.

I like what the game is doing payout wise, as its highest reward will reach 8709x total stake. It’s a jackpot that looks good for a slot machine like this, which is expected to have high volatility. The result is a type of gameplay that will not appeal to everyone, particularly to casual players that don’t have a lot of experience.

Beyond the game’s payouts and volatility, it’s also important to check out the RTP. This figure tells us how much the slot machine will pay back overall, not just to any individual player, and it’s set to 96.14% here. It’s acceptable for a slot machine, but at an average level.

Divine Lotus is one of the games that you should pay attention to, highly volatile but also with big potential, and fun to play as well.