Very colorful, a bit creepy, but also funny in its own way,  Esqueleto Explosivo 2 borrows from the popular Day of the Dead holiday, which is famous in Mexico. It’s also the second game that Thunderkick has designed in this particular series, and it’s just as fun as before.

The characters and symbols are all skulls, with varying number of teeth, different colors and drawings on them. Look behind the game area, and you find a building that’s decorated for the holiday and the party that comes from it. 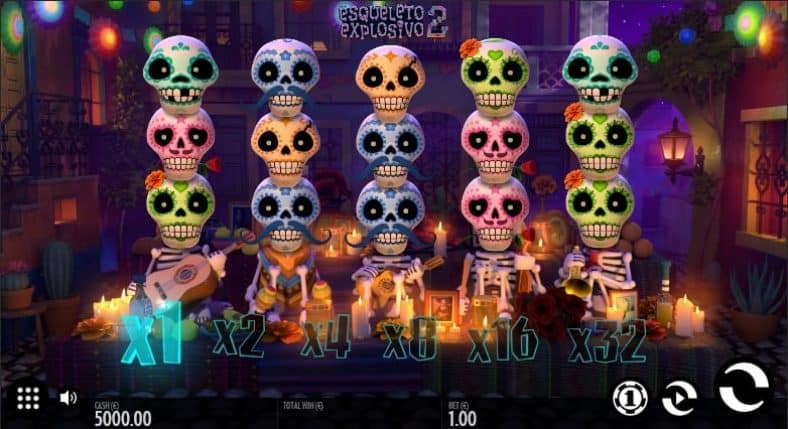 Thunderkick is not a big developer, but it does have several games which are popular, or have been in their time. The company was founded in 2012, in Sweden, and these days it holds licenses in both UK and Malta. It’s a developer with fun games collection, though most have lower volatility and rewards than this particular game does.

It’s not difficult to start playing Esqueleto Explosivo 2, even though the number of lines is so high. All you have to do is select the amount that you can afford to wager, using the predetermined values that Thunderkick implemented. Those values go from $0.10 to $100.

What the game gives you in exchange, is 5×3 reels, where there are 99 paylines active. Create your wins with 3+ matching symbols, when they land in consecutive order on a line, left to right. It’s just like in every other game, only the number of lines is higher.

A very easy to get feature in Esqueleto Explosivo 2, the Dropping Symbols will kick in whenever you’re forming a winning combination. This is followed by the removal of the winning symbols from the game area, and then there are others brought in and a multiplier will go up. You start off with regular wins, but then the boost to wins is at 2x, 4x, 8x, 16x and 32x, at least for the paid spins.

Another way to get symbols removed and the multiplier to go up, is through a wild symbol which explodes on one of the middle reels. Up to 8 symbols will be destroyed then, though only regular ones, not the jackpot trigger or the scatters.

With Purple Skulls on the reels, you have there scatters, which appear 3 to 5 times and trigger 10 to 14 free games. Retriggering this feature is done with 2+ symbols, and you get 3 to 12 extra rounds. Another extra feature comes through the Explosivo Wilds, every third one that appears giving you one more round and removing the lowest value multiplier. Up to 64x multipliers become possible at this point.

It’s a different time, and a different type of game, so the sequel of Esqueleto Explosivo will pay a lot more. Up to 5,000x the stake is promised here, an excellent return for a wager of up to $100. You do find that the game has increased volatility as well, but when coupled with a 96.13% RTP, there is still enough there to keep it interesting.

Esqueleto Explosivo 2 is a better choice for players that are into high volatility and want a big juicy target when they’re playing a slot. Not as good for casual players, since there is a fair amount of risk involved.