Hades, the Ancient Greek god of the underworld and death, is the one that inspires the latest Fantasma Games slot machine, and of course the river Styx is also mentioned in the title. The design inside is a darker one, but when you’re talking about Hades, that’s the sort of look that you should be going for.

Many of the symbols that you get inside will revolve around Ancient Greek imagery, so in addition to symbols with Hades, there is also Persephone, Cerberus (dog with three heads), Greek soldier helmets and a Horn of Plenty. You then move on to the low value pottery icons, which have images of goats, snakes, bulls, lions and ravens on them. 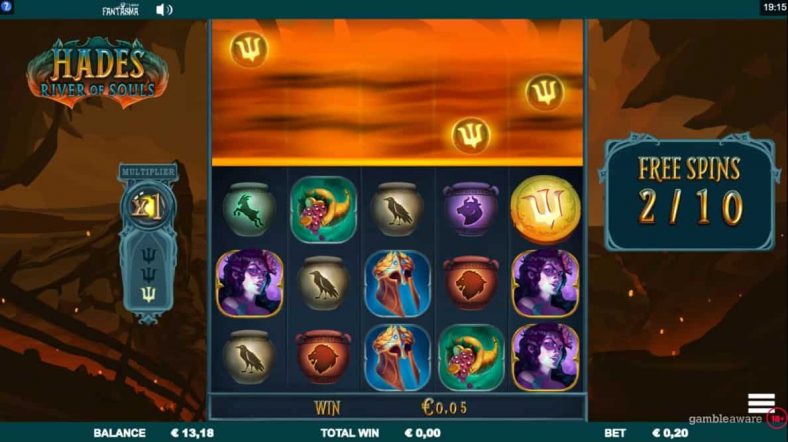 You will see this game advertised as a slot machine from Microgaming and Fantasma Games. The actual developer is the latter, while Microgaming is in a partnership with them, to offer the slot exclusively on their platform, making it accessible to over 800 casino brands.

How To Play Hades River of Souls Slot Machine

The betting system available for Hades River of Souls is a fairly accessible one, allowing you to wager as little as $0.20, or as much as $50 per spin.

In exchange, you are getting access to 5 reels & 10 paylines, where the volatility is a bit high. It might be on the riskier side, but that doesn’t mean that you can’t have fun with it. It’s not a very difficult slot to figure out otherwise, but do expect some modern features that are not particularly easy to find somewhere else in this exact form.

The slot might have only 10 lines, but the wins forming here will pay both ways, so if you’re lucky enough to get 5 symbols of the same type, the reward for a line is paid twice.

Whenever winning combinations form, the Avalanche system will follow next, giving the player new symbols to play with and form additional wins.

You get wilds as well, symbols that are then used as part of various winning combinations. They’re useful as substitutes, but at the same time they also get collected, and this boosts the Wild Souls Multiplier by 1x, for every three such symbols that you get. Once the Avalanches end, the collected wilds determine what kind of multiplier will be used for all wins of that round. After that, the multiplier resets back to 1x, before the next round can begin.

The one randomly triggered feature of Hades River of Souls is the one called Skull of Charon. It will bring a skull symbol on the reels, which then moves around and takes out up to 10 regular symbols. The Avalanche that follows will replace the empty positions with new symbols, and hopefully that means new wins as well.

As for the Hades Free Spins, those trigger as a result of the Trident scatters landing three times in view. You get 10 to 20 free spins then. In this mode, getting three wilds to participate in combinations will boost the multiplier by 2x. Another difference is that the multiplier doesn’t reset.

Payouts can be pretty good in Hades River of Souls, even reaching a maximum value of 5,058x total stake. Naturally, it’s a game with High volatility, but I’m satisfied that the RTP is good, at 96.56%.

Hades River of Souls will deliver a good mix of features, excellent rewards, and while it comes with high volatility as well, it should offer enough to get a lot of players interested.