“The book is open and the King’s spirit has escaped”, says Play ‘n GO as an introduction to its new video slot featuring the Ancient Egypt theme. The developer refers to a well-known Egyptian pharaoh Tutankhamun whose tomb was discovered back in 1922. Although it was apparently robbed shortly after the initial burial, archaeologists managed to unearth more than 5,000 items including King Tut’s face mask, a gold coffin and a lotus chalice.

Fear not; despite the rumoured curse of the pharaohs fuelled by deaths of a few people involved in the discovery of the Tutankhamun’s tomb, there’s no real danger in playing Legacy Of Dead and plenty to be won.

Play n’ GO has seen to that by incorporating several profitable features and among them free games with expanding symbols. A lot of effort was invested to create appealing visuals as well as a dramatic soundtrack with sound effects designed to build suspension while one’s waiting for the final feature trigger. 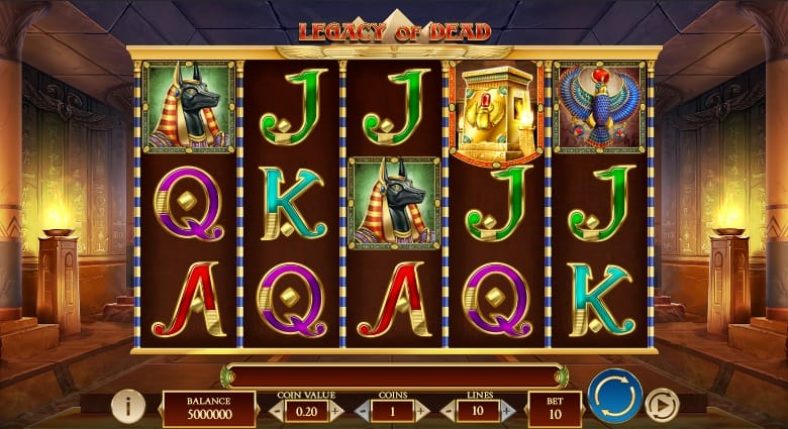 Play ‘n GO is a Swedish game studio active since 1997 which started operating independently in 2005. It ranks amongst the most popular developers even though it can’t compete with the likes of Microgaming and NetEnt in terms of the size and diversity of the gaming portfolio. What makes Play ‘n GO titles appealing are high quality visuals, full surround sound and an abundance of creatively executed special features.

The action takes place inside an Egyptian temple with walls illuminated by torches and covered in hieroglyphs. Tutankhamun, Horus and Anubis appear as the top paying icons while playing card symbols facilitate low value wins.

All symbols pay from left to right except for Scatters which pay regardless of their positions. There’s an option to play 10-100 spins automatically and stop Autoplay on any win, if free games are won, if single win exceeds the amount specified by the player, or if balance increases/decreases by X.

A burial chamber acts both as Wild and Scatter. It will help you form winning combos by standing in for any missing icon but also trigger free games if 3 or more appear simultaneously. The player is awarded 8 Free Spins to start with. Before free-play begins, a scroll with all game symbols appears on the screen and one icon is randomly selected.

Each time it lands, this special symbol will extend to cover the entire reel. An additional benefit is that special symbols need not appear on adjacent reels in order to win. Landing 3 or more Scatters while playing for free gets you 8 more spins on the house as well as another expanding icon. It’s possible to activate as many as 9 of the latter by retriggering the feature multiple times.

The game additionally offers a Gamble option which activates after each win. It provides an opportunity to double the payout by correctly guessing the colour of the next card or quadruple it by predicting its suit. One can gamble up to 5 times in a row.

Legacy Of Dead is a highly volatile slot with an above-average RTP of 96.58%. Players can win up to 250,000 coins and possibly even more if they’re willing to gamble.

The first slot Play ‘n GO has released in 2020 comes as a kind of an upgrade of another popular title with the same theme – Book Of Dead. The two are exceptionally similar in terms of the design and gameplay. That may displease players looking for something new but also appeal to fans of the original game.

The mechanism is simple enough and the minimum bet value low enough to attract a wide audience.  Although there’s only one special feature worth mentioning, the game can pay a hefty amount. Don’t forget it’s highly volatile so it’s important to keep an eye on your balance and adjust bets accordingly to make sure your gaming session doesn’t end too fast.