It’s a game with an Ancient Greek theme, with very good graphics, but overall the look is not a very original one. Its symbols give us images of Lightning Bolts, Temples, Mystery icons, Zeus, Ares, Athena and Aphrodite, while the Royals are the low value options.

Legacy of the Gods Megaways 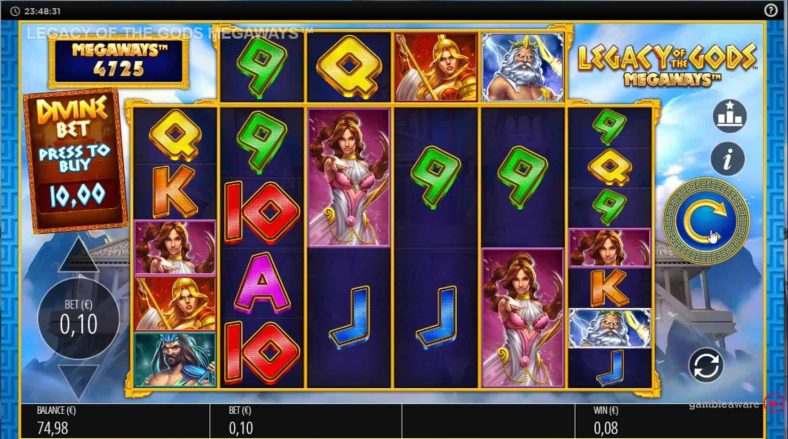 It’s one of the slots delivered by Blueprint Gaming, a developer that has launched several other very good Megaways games already. Based in UK, and owned by a huge gambling conglomerate from Germany, the developer has a good mix of branded and regular slots on offer.

You spend between $0.10 and $10 per spin, that’s all you have to do, and the game will deliver a random number of ways to win active in exchange.

You don’t get a set number of lines in Legacy of the Gods Megaways. Instead, you play on 6 reels, with anywhere from 2 to 7 active symbols on each one. Up to 117,649 Megaways are available, for combinations to form on.

Legacy of the Gods Megaways follows the same recipe as most Megaways titles, and it gives the player a way to land more wins in a single round, than he would typically get. It’s through the Cascading Reels mechanic, that this is possible. The symbols involved in wins will all be removed, allowing for new ones to come in and create additional combinations.

Temple Wilds are easy enough to get, at least compared with other feature symbols, and they can be helpful along the way, though without being spectacular in their effect usually. Either way, having wilds in a game with ways to win is going to make them a lot more useful than on regular lines, since their position on a certain column doesn’t matter, they always contribute to new wins.

A Mystery feature is present here as well, and it is available to be used whenever its symbols land in view. They are all transformed into a single regular symbol, to hopefully help form more or better wins for that round.

As for the free spins, the feature where the potential is at its highest, you get inside by landing Lightning Bolt symbols, scatters that you need on 4 or more reels. In exchange, this game delivers a number of free spins and a certain multiplier. It’s your decision which of these options you go for, and the number of triggering scatters has an effect on the options that you’re given.

The option with medium volatility is to get the 15 to 27 free spins where the starting multiplier is 1x, and will go up by 1x for each new cascade triggered.

With high volatility, there is an option to have 10 to 16 free spins, during which you start from 2x and go up by 2x after cascades trigger.

Finally, with very high volatility, you can get a smaller number of spins, just 5 to 8 rounds, but with a 3x starting multiplier, and going up by 3x following each cascade.

There is even the option to randomly mix and match these options, if you prefer to leave it all to chance, and pick the Mystery variant.

There are plenty of reasons why Megaways slots tend to be loved by players, but I’d say that their excellent payout potential is one of the biggest. In this case, we’re looking at an impressive 50,000x the stake jackpot, the highest payout that the game is allowed to pay, though in theory this beast of a game could go even bigger.

Do expect a game with high volatility here, but count on it having a good RTP as well, at 96.50%.

You’re looking at a pretty good Megaways title, one with excellent rewards and a good variety when it comes to the free spins, which is where the potential is best as well. Definitely a game to look into, if you’re into slots with high volatility and high rewards.