Africa is the sort of place that many dream about visiting, and yet only few will ever get to see it. Perhaps that’s why slot machines with this sort of safari-style theme are so popular, and Blueprint Gaming chose to rely once again on it for this title.

Rhino Rampage delivers not just rhinos on its reels, but also a variety of other wild creatures of Africa, ranging from leopards, to hyenas, meerkats or warthogs. Eventually, you will end up looking a lot at the game’s Royals, those going from J to A, and having the smallest value.

It’s not a bad looking slot machine, but it’s not one of the better options around either. Compared with everything else available at online casinos right now, I’d say it’s rather bland. 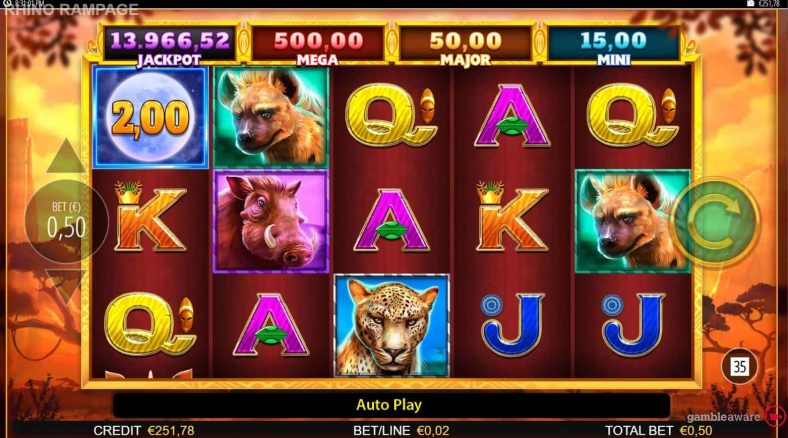 The company behind the release of Rhino Rampage is called Blueprint Gaming, and it’s UK based, with German owners (part of Gauselmann Group). They’ve done a great job implementing the Megaways franchise from Big Time Gaming into their games, and they’ve become known for high volatility slots, which can be quite interesting when it comes to features. Just don’t look for great graphics in their slots, they rarely deliver something noteworthy in that department.

You’re able to pick the wager that works best for you, and the range within which it will fall is somewhere between $0.25 and $125. This means that your line bet will have its value between $0.01 and $5.

Rhino Rampage is a game with 5×3 reels, where there are 25 fixed lines present. It’s not quite a standard slot machine, particularly because it uses those Colossal symbols, but that doesn’t mean all that much.

As you’d expect, you will find that the Rhino is one of the top symbols that you get to use in Rhino Rampage. Not only is this symbol capable of creating new wins on its own, when placed next to other Rhinos, but it also offers the biggest rewards of the game, up to 40x the stake on each line. At the same time, this is the wild symbol, and it will be used as a substitute whenever this is possible. Both stacked and regular versions of the symbol exist.

Should the scatter symbol appear in view, three times on just as many reels (1, 3 or 5), you get 5 free spins then. In this mode, the middle three columns are merged, and there will be 3×3 Colossal symbols landing there.

Lightning Spins is one of the major features that were added to this game. Accessing it is usually done via Moon symbols which appear scattered on the reels, and a minimum of 6 times in the same round. It’s a fairly common feature these days, where re-spins are offered in an attempt to land additional Moon icons in view. These all become sticky, and if there are new ones that land, the re-spins reset. Eventually, you can end up with a progressive jackpot or one of the three smaller fixed jackpots.

Whether we’re talking about the progressive jackpot, or of the game’s own maximum payout, I think players would be equally interested in getting paid by them. The reason why the latter can compete, is because it has a value of up to 25,000x the stake, which is impressive by any standards.

Of course, do expect this to be a game with high volatility, but I think you will appreciate its RTP, of 96.28%.

Rhino Rampage does enough to make itself interesting to players, using big payouts and progressive jackpots for this, but features are rather boring and less than I would’ve expected from this particular developer.