Mega Moolah online slot is one of Microgaming’s most prolific slots of all time. It has a reputation for making millionaires out of nothing thanks to its huge progressive jackpot payout both reported on mobile and desktop play. Probably the most well-known case is when a 26-year-old British soldier won a massive £13,213,838.68 playing Mega Moolah. There was little chance Mega Moolah was going to be left out of the top 30 best slots online!

The theme was pretty much invented out of thin air. Set on the African Plains Mega Moolah gives players the chance to hunt down a huge progressive jackpot amongst other wins over 25 pay lines on 5 reels.

The slot pays out a 94% Return to Player, and every time a bet is made, a portion of that bet is placed into the progressive jackpots to which there are 4: Mini, Minor, Major, and Mega. Supported on both mobile and desktop play, the slot’s playability is widely praised. 3D graphics and very simple gameplay mean that even newbie slot players will immediately get to grips the world’s highest paying progressive jackpot online slot.

To land the progressive jackpot, players have to keep on hunting day and night until the randomly triggered progressive jackpot bonus wheel comes into play. In the meantime, players can spin the reels for features packed with multipliers. There is scatter spin bet multiplier that also triggers a free spin round where all wins are tripled, plus any combinations with the wildcard will have their payout value doubled.

A huge game, with a huge potential jackpot, plenty of multipliers from a huge slot developer and casino platform provider.

The Mega Moolah online progressive jackpot slot is available on both mobile and desktop via Microgaming’s Quickfire delivery system. Gameplay is relatively simple allowing Mega Moolah to run smoothly on most devices and operating systems such as Android, Windows, and iOS.

Expect 3D graphics with some animations and sound effects of sounds you would hear in the wild plains of Africa. Birds tweeting, Hyenas barking, and the roar of Mega Moolah’s Lion. Symbols include a Lion, Elephant, Buffalo, Giraffe, Zebra, and Impalas giving the slot its true African theme.

In addition to wild multipliers, the scatter symbol is also going to be a regular source of income during any session. 3 Scatters are not so frequent, but as the scatter pays out for just landing 2 on a pay line, you will be doubling the value of your spin bet quite often.

Aside from the wild and 2 scatters being the main source of income, the Wild Lion symbol, Elephant and Buffalo symbols will also be paying out often as they pay out for landing just 2 of a kind on a pay line.

As for big wins, players will be netting these by landing 3 or more scatter symbols triggering the free spins round where 15 free spins will be awarded, and all wins are tripled. With the wild on the reels too, your combinations that include the wild will be doubled then tripled.

Obviously, there is also the ever-looming chance of the progressive jackpot wheel randomly dropping in, but this is rare! Nonetheless, the more you play Mega Moolah, the higher the chances are of the random bonus wheel.

Look for the Wild symbol because this is Mega Moolah’s wildcard. Not only is the wild the base game’s highest paying symbol, it is also the key to x2 multipliers. Each time the wild begins, lands in the middle of, or pins itself onto the end of a combination as a wildcard, that combination’s value will be doubled. The wilds as a symbol combination of its own will pay out for landing 2, 3, 4 or 5 on any pay line.

The African tribe’s women, with the purple face and greens eyes, is Mega Moolah’s scatter symbol. Your spin bet will be multiplied by x100, x20, x3, or x2 for landing 5, 4, 3, or 2 scatter symbols respectively. The wild cannot substitute the scatter symbol simply because the scatter symbol is already incredibly easy to land. It is not tied down to any pay line nor does a combination need to begin on reel 1. Just land 2, 3, 4, or 5 anywhere in view and the spin bet multiplier will be activated.

For 3 or more scatter symbols anywhere on the fact of the Mega Moolah reels, you will be awarded 15 free spins. Any wins that you land during the 15 free spins will have a x3 multiplier added to them.

At any time during the game, the Mega Moolah Progressive Jackpot Wheel can launch. This is usually when the scatters have landed on the reels. Rather than the free spins being activated, the progressive jackpot wheel will jump on the screen. There are 20 spots on the wheel, and only 1 of those spots is the Mega Jackpot. That means you only have a 5% chance of winning a life-changing amount.

During the wheel spin, the drums will roll and African chanting will be spurring you on to land the slim 5% chance of getting Mega Jackpot worth millions!

Microgaming has a progress jackpot network that allows the jackpots on progressive slots such as Mega Moolah build up to multi-million dollar payouts. Multiple casino brands such as Gaming Club and Vegas Paradise will connect to the Microgaming Progressive Jackpot Network (MPJN). Mega Moolah builds its progressive jackpot by using a percentage of player bets. If this slot was only featured at a single casino, then only members of that casino will be able to connect to the slot.

Maybe it does not need mentioning, but the chance of winning a jackpot that will almost certainly make you a millionaire is also a very good reason to play. Besides, the Major jackpot is also a high paying jackpot – maybe not life changing amounts, but still into the thousands, which is no small amount.

Aside from the fact that Mega Moolah has an obscenely high progressive jackpot, you may be drawn into this slot by the many multipliers that applied to wins via the free spins round and the wild symbol connecting symbols. There is also the scatter symbol that offers multipliers of your spin bet.

There are also lots wins that come under the ‘little and often category’. With 3 of the symbols on Mega Moolah paying for just landing 2 on a pay line, you will always be kept entertained.

Overall, the base game without the progressive jackpot is still very attractive.  Plus, almost everyone loves a theme based on African wildlife and their habitat. 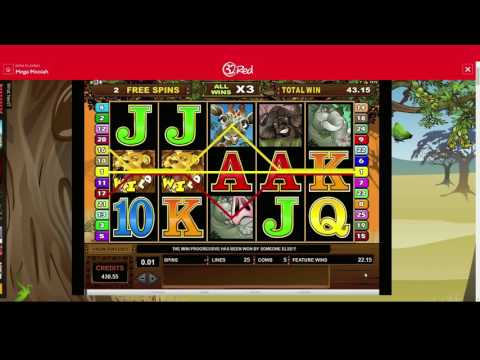