The sequel, Nitropolis 2, is taking us back to the futuristic city that the first game covered as well. Once again, we’re looking at the same gangs of formerly domesticated animals, all racing on its roads. You’re going to notice the city’s skyscrapers and advertisements in the background image, while the dark looking reels feature a mix of symbols that revolve around certain colors and gangs. Each gang has one top symbol with one of the animals, a symbol with the gang logo, and a Royal of the gang’s color.

This means that the regular symbols will feature the Pest Control dogs, the Dobermans which are the Dirty Dawgs, the Gritty Kitties, and the Pug Thugs. There are four dogs and cats, four Wanted posters with their logos, and four Royals, Jack to Ace. A couple of feature symbols are also present, with the Bonus logo, and a Wild.

ELK Studios has always designed slot machines that are fun to play, and we see it in Nitropolis 2. The difference is that this slot machine innovates, just like the original did, using the Nitro Reels to attract players that love games with big payouts. 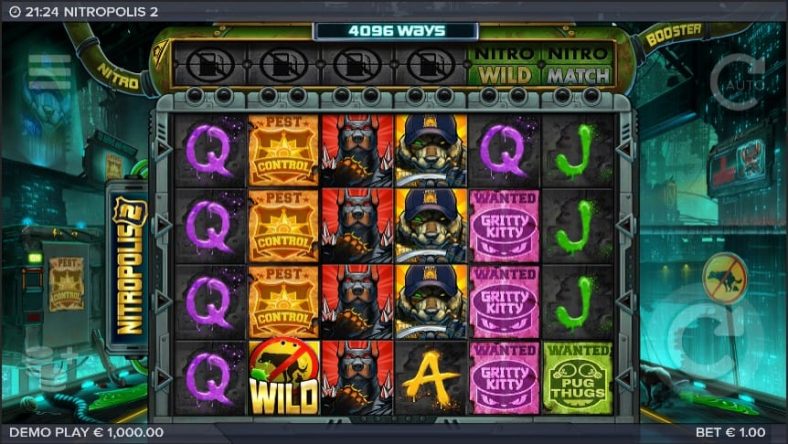 You’re going to play on 6 reels, and there are typically 4096 ways to win active there. The Nitro Reels allow you to expand the game area though. Winning combinations will form when 3 or more symbols appear left to right, on consecutive reels.

First, a word about Nitro Reels. These are double-stacked symbols, that will have within them 4 to 12 symbols, all of the same type. Since you go from 2 to as many as 12 symbols in those spots, the reels can have up to 24 symbols, if you get two Nitro Reels there. That’s a huge expansion of the game area, and it can occur on multiple reels at the same time.

Get a win to form, and a Winning Respin will trigger next. It will hold the winning symbols, along with the Nitro Reels that contributed, while the rest of the positions will respin. Should new combinations form, the respins continue.

Help will come from the Wild, a substitute that’s used in the place of any regular symbol. It will also form combinations directly, and it pays as a top symbol would.

10-25 free spins can be obtained, when 3-6 Bonus symbols appear scattered at the same time. In this mode, the Nitro Reels are locked in their positions, so you keep using a bigger number of ways to win, once you got to that stage.

The game has one more extra feature to offer, compared to the original slot. It’s a Nitro Booster reel, shown at the top, showing 8 types of modifiers, to be used on the reels below. Some will give you wild reels below, others will add wilds to the Nitro Reels, or will allow only high value symbols to land there. Upgrades, respins, pays both ways, these are all potential modifiers that you can trigger.

There are some good things to note about Nitropolis 2, like the 10,000x jackpot that the game will deliver. The downside is that the 95% RTP is much lower than the average amount expected to get back to players these days.

Nitropolis 2 improves on the original slot machine in some ways, adding more features and reducing some of its volatility. Unfortunately, it reduces the RTP to 95%, from the original’s 96.10%, so I would suggest you stick with the first game of the series.