Genghis Khan is a name that needs no introductions. He was a fierce leader, and has brought the mighty Mongol empire to its highest point. Spanning across Europe and Asia, it was a well-run and organized nation, up until its leader died. And while the empire no longer exists, the terrifying legacy it left behind still impresses and inspires many.

It certainly seems we can add Thunderkick to this list! In their latest venture, they take inspiration from the Mongols to craft a gorgeous slot. The reels take the shape of a beautiful dark red pagoda. In the distance, you can see a pair of beautiful, snowy mountains, illuminated by the setting sun. And if you squint real hard, you can even see the first stars appearing in the darkening sky.

Available special features should appear familiar to anyone who’s played a Book-style game before. The Wild and Scatter have been rolled into the same symbol. Collect three or more swords to win between 5 and 15 free spins. During these extra turns, a random icon will be chosen to become an expanding symbol. And if the icon has already been selected before, it will instead add a multiplier to the expanding symbol! 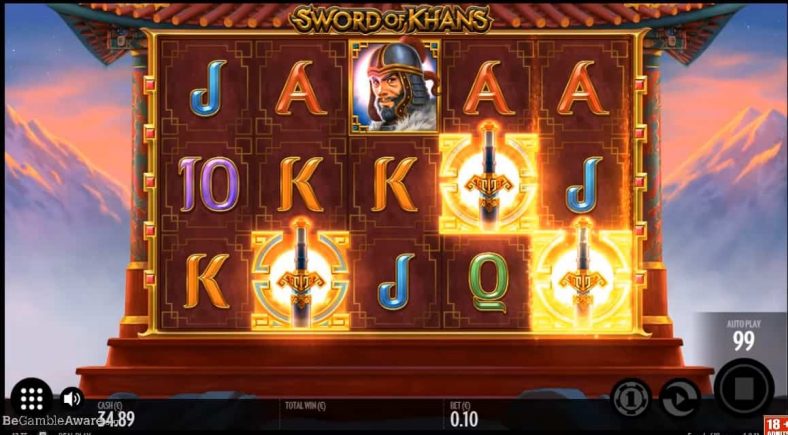 Thunderkick is a relatively new name compared to other industry giants. It was founded in 2012 by former NetEnt employees, who wanted to experiment and innovate with their releases. The results were impressive, and the developer quickly caught the public’s eye. While their popularity has waned in recent years, the quality of their slots keeps going up. We can only hope the positive trend continues, and Thunderkick becomes the global presence it deserves to be.

Sword of Khans is played on a 5×3 board with 10 fixed paylines. Gamblers cannot adjust their total bet manually. Instead, they can simply choose from a batch of pre-selected wagers the developer set out for them. As such, they can bet between $0.10 and $100 per spin.

The software provider hasn’t made any changes to their layout ever since their 2012 debut. We have to admit, that’s pretty impressive! But it just goes to show how long a good user interface can last when you get it right the first time around.

Autoplay isn’t bad, but it could certainly be a lot better. Gamblers can only choose the number of auto spins, and if the bonus should stop on a feature win or not. You cannot set things like win or loss limits, or a single win limit.

Icon designs aren’t bad, but they are basic. The game gives us playing card royals, in all their colourful glory, which hardly fits the theme. Then, we have pieces of Mongolian armour, which we mostly like. We just wish they included their iconic composite bows! The strongest regular symbol is the bearded Mongolian soldier, who pays the same as a five-of-a-kind Wild win.

As we already mentioned, the Wild and Scatter icons have been combined into one symbol. This improves your odds of both winning a cash prize and triggering the special feature at the same time.

Three or more Wild-Scatters will award between 5 and 15 free spins. The number of extra turns is determined randomly. While free spins are being played, if two or more Sword symbols appear, they will retrigger the extra turns.

Each time free spins are triggered or reactivated, they will choose a new expanding symbol. If an icon is selected for the first time, it will expand to cover the entire reel when it lands on the board. If a symbol has already been chosen as an expanding icon, it will instead receive a multiplier increase, which applies to all wins that contain that icon. An expanding symbol cannot exceed a 3x multiplier.

This Thunderkick release has a high volatility, and a jackpot worth 10,000x your total stake! Sword of Khans has an RTP of 95.36%, which is slightly below the current industry average.

This is a pretty looking slot, with a new twist to a familiar gameplay formula. Players are quite used to Book-style games at this point. But the addition of multipliers applied to already selected expanding icons was a great move on Thunderkick’s part. We definitely suggest checking the release out if you like that type of slot.