Ted is an online slot by Blueprint Gaming that we cannot get enough of. With 5-reels and 20-paylines, this online slot has been themed around the hilarious movie of the same name and is jam-packed with fabulous game features.

Having a low to medium variance, Ted is one of those online slots where there always seems to be something going on. Furthermore, with no less than eleven bonus features, there will always be something that you are yet to unlock.

Carrying an RTP of 95.80%, Ted is an online slot that always does well at the online casinos and with so many game features it is easy to see why. Read on to find out more about this excellent slot by Blueprint Gaming.

Ted looks amazing it has to be said, the effort that has been put into the graphics and animations is plain to see. This will certainly appeal to players that like their slots to look good.

Low-paying symbols on the reels are made up of the playing card symbols ranging from the Jack to the Ace. As for the higher paying symbols, these will be the main characters from the movie, a swan, some beer, a bong and the games logo.

There is also a great betting range on Ted too, as you can place bets of between 0.25 and 500.00 per spin. That will surely be enough to keep the high rollers happy as well as players that have far smaller bankrolls.

Without a doubt, the main reason players love this slot is because of the excellent features that it has. As well as having wild symbols and a gamble feature, there are eleven different bonus rounds that we will go into more detail about below.

What players love the most about Ted is the many different bonus features are available. The Thunder Buddies feature alone gives players the possibility of unlocking one of five different bonus rounds.

Unlocking this feature is done by landing at least three of the Thunder Buddies bonus symbol on anywhere on the reels. Once you have managed to do just that, you are taken to a Wheel of Fortune and given a spin which will result in one of the following bonus features:

Another fantastic game feature on Ted is that of the random bonuses that can occur during the base game whenever Ted wakes up. There are six different mini-games available and these are selected randomly.

What is there not to like about this fantastic slot? It has the graphics, the effortless animations, the wide betting range, regular payouts and of course, a bunch of fantastic features that will always keep you interested.

Even if you are not a fan of the movie (it’s hilarious by the way), you are going to love this online slot. Ted simply has everything you could ask for from an online slot. In fact, the only thing we can even find that is a bit of a negative is that it uses playing card symbols. That is just a pet hate more than anything else and just a tiny issue. Apart from that, this is about as good an online slot you will find.

Go check it out for yourself and we are sure you will instantly become a fan in the same way that we did. 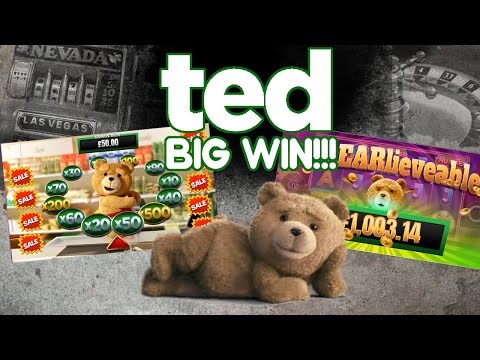