It seems that the good people of Microgaming had enough of the hot and sunny Africa and that they decided to conceal their vast treasures deep underwater.

During this venture, they have discovered the lost city of Atlantis, and, thanks to their latest video slot, called Atlantean Treasures Mega Moolah, players will have an opportunity to explore Atlantis, meet the mysterious Mermaids, and win one of four progressive jackpots on the offer.

Another Mega Moolah video slot is coming your way, offering five reels, three rows and benefiting from 10 fixed paylines. Apart from the four progressive jackpots, the 2020 release offers expanding Wilds, Wild reels and respins, while the biggest payout you can land in the base game is set at 500 times the bet. 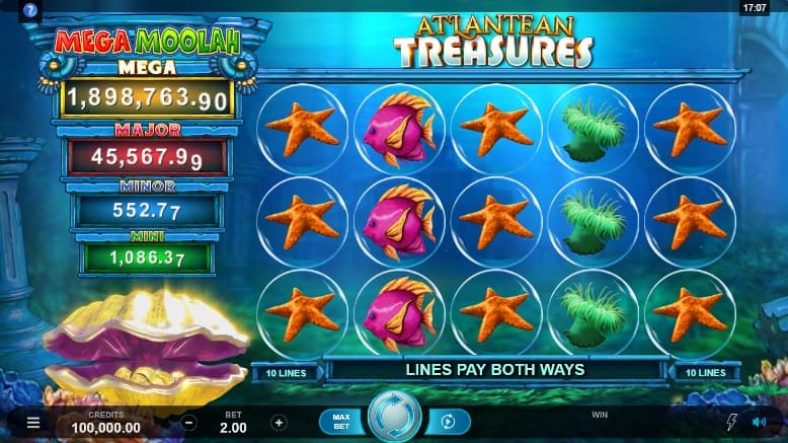 When talking about the true pioneers of the iGaming industry and online casinos, we simply have to start our story with Microgaming, the company that created the first online casino software in the world.

Hundreds of online slots can be found in their portfolio, because, over the years, they have partnered up with plenty of companies and game studios in the world, simply to deliver games that will meet the demands of their enormous market.

Put your snorkelling equipment on, because we are about to go to the very bottom of the ocean, where the long-lost city of Atlantis has been finally located. The city is in ruins, but there are still some Mermaids living down there, representing Wilds that can cover entire reels and substitute for all other icons.

All the symbols that appear are wrapped in bubbles. The Bar icon and the Lucky Seven are leading the pack of regular symbols, followed by the critters that inhabit the ruins of Atlantis. Two types of Fish will appear on the reels, as well as a Seahorse, Seaweed and a Sea Star.

Mega Moolah video slots are quite simple and easy to understand and that is also the case with Atlantean Treasures. The 2020 release features a standard 5×3 reel grid and offers 10 fixed paylines, which pay both left to right and vice versa, so you can land your winning combos both from the rightmost and the leftmost reel.

Just make sure you get at least three matching icons on a payline if you want to start winning payouts. The betting range is very wide and will meet the demands of both penny punters and high rollers because players can wager as low as $0.10 and as high as $200 per single spin.

The Mermaid Wild will appear only on reels 2, 3, and 4. It is three-cell high, so it can cover the entire reel. It will expand if there is a possibility to land a winning combination. Once that happens, the Mermaid Wild also triggers a respin, with the Wild being locked in its position. It is possible to land up to 3 expanding Wilds and get up to 3 respins at once.

The central attraction of the Microgaming product is the four progressive jackpots on the offer. Each of them has a different starting position.

Mini begins at $10, Minor starts at $100, Major goes from $10,000, while the lowest you can win in the Mega Jackpot is $1,000,000. To trigger the Progressive Wheel, you need to collect the Progressive Scatter, a Golden Pearl that appears on central reels. One of the Scatters will trigger the Wheel and get you one of the four jackpots.

So, we have already told you that there are four different jackpots on the offer and all four of them have a different starting position.

No doubt, most of you will be looking for the biggest catch – the Mega Progressive Jackpot, since it offers at least $1,000,000. If you do not land any of them, you can expect decent wins during the base game, up to 500 times the bet per single spin.

Well, due to the fact that Mega Moolah video slots are very popular, we have reasons to beleive that Atlantean Treasures will have the same fate as its predecessors, because everything will revolve around the four progressive jackpots on the offer.

While you wait for the Jackpot Wheel to be triggered, you can enjoy spending time in Atlantis, look for Mermaids and trigger respins with sticky expanding Wilds. Once you get tired of staying so deep underwater, yo can always return to the surface and tru one of the others Mega Moolah video slots.