Based on the popular Gonzo, previously a character in a NetEnt slot machine which had the conquistador looking for treasures in South America, this new release adds the Megaways engine to the series, and it’s coming via Red Tiger. It will keep a lot of the graphics which made the slot popular in the past though, so they didn’t mess too much with the look of the original, just its layout and features.

You see Gonzo next to the reels, and in the much larger game area, there is about the same mix of idols carved into stone. The background image is occupied by the ruins of a temple. It’s a familiar sight for someone that has played the original Gonzo’s Quest, which is a good thing for such an iconic title. 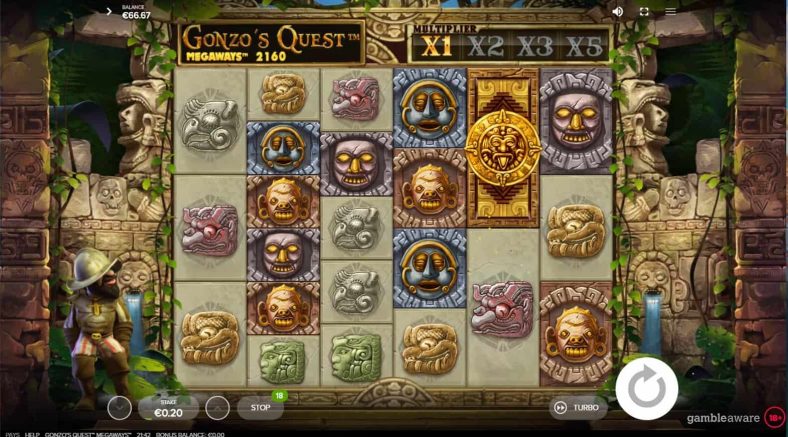 The game is designed by Red Tiger and NetEnt, the reason probably being that the former owns the Megaways license. Red Tiger was acquired by NetEnt in late 2019 though, so it’s a family affair. Both are highly respected names in this industry though, and NetEnt is one of the top developers. Some of the most popular slots around are from NetEnt, and the original Gonzo’s Quest was one of those titles.

Spending anywhere between $0.10 and $4 for a single spin, the game will give you a random number of ways to win in exchange.

It’s the usual Megaways setup, with 6 reels which get 2 to 7 symbols in each case, decided at random for individual columns. The maximum number of ways to win is 117,649. There is no horizontal reel set at the top, the way you might find in other titles.

The Avalanche, as well as the increasing multiplier that accompanies it, are still part of the game. It all starts with the formation of a new combination, which is followed by an Avalanche, where the winning symbols are removed from the game area. A multiplier goes up as this happens, to 2x for the first Avalanche, 3x for the second, and then 5x for the third and the others that follow. It will go back to 1x, at the end of the paid spin.

The Unbreakable Wild is a symbol that can appear once or twice in a single spin. If they do, then one is present on the first three reels, while the other gets one of the next three. These are called that way, because they can’t be removed by the Avalanche, and it keeps its place in order to contribute to more wins and Avalanches.

Via the usual scatters, the game can trigger 9 to 18 free spins, or free falls as they call them here. You get a better multiplier range, from 3x to 15x, plus you can retrigger the feature. You also get to use the final Multiplier from the free falls, in the first paid spin that follows next.

Earthquake is a random feature, which you can get triggered. It removes low value symbols, and the reels will get only high value positions to replace them.

It’s a game that stays true to the Megaways category, offering rewards of more than 20,000x the stake. Though the volatility will be high, it’s also worth mentioning that the RTP is good, at 96%.

Gonzo’s Quest Megaways looks as impressive as the original, and now there is even more potential and higher risk than before. A game with big rewards, and with both old and new mechanics for players to enjoy, I’m certain that it will be quite popular as well, just like the original.